When was Yeshua born? The Gospel writers either did not know when the event happened or they did not feel the information was important enough to pass along. We can only speculate.

Two centuries after it happened, Clement of Alexandria discussed the dating of the Master’s birth, but he did not mention December 25 or January 6 at all. Instead, Clement reported one tradition corresponding to April 20 on our civil calendar and another tradition corresponding to May 20. By the middle of the fourth century, however, the Roman church had begun to honor December 25 while churches in the East, Asia Minor, and Egypt observed Jesus’ birth on January 6. Both are late developments and unsupported by early tradition or biblical evidence. No trace of a tradition from the early Jewish believers connects the birth of the Messiah with December 25 or January 6.

This is normally the sort of conversation you have in December when the vast majority of the Christian world prepares to celebrate the birth of Christ. One thing we can be certain of is that Jesus was born nowhere near December 25th. But it has been suggested that he might have been born on or near the festival of Sukkot. Could this be true?

I recently had a private request for any information I knew about this possibility. Alas, it’s not something I’ve written on before (although I’ve heard some commentaries on the topic). Fortunately, D. Thomas Lancaster has written on this in the above quoted article in Messiah Journal 111, which was published last year. Does Lancaster conclude that the Master was born during this season and if so, what is his evidence?

Other Sukkot-theory proponents claim, “Yeshua was born in a sukkah because the word ‘stable’ is sukkah in Hebrew.” These arguments are not at all convincing and fall apart under scrutiny. Is there any legitimate evidence of a Sukkot birth, or is the birth of Yeshua at Sukkot just more Hebrew roots movement apocrypha?

That doesn’t sound too encouraging. As much as the symbolism may attract us and fit into the theories and emotional dynamics of certain individuals and groups, is there any real evidence to establish the idea that Jesus was born during Sukkot? What line of reasoning and investigation could we use to support or refute this viewpoint?

Lancaster suggests that we could compare the birth narrative of John the Baptist to that of Jesus. We know, based on Luke 1:26 and 1:36 that the conception of Jesus came about six months after the conception of John, thus we can assume that Jesus was born about six months after John was. If we could determine when John was conceived and/or born, we could reasonably deduce when Jesus was born.

And now you will be silent and not able to speak until the day this happens, because you did not believe my words, which will come true at their appointed time.”

And now you will be dumb and unable to speak until the day when this has taken place; because you did not believe my words–words which will be fulfilled at their appointed time.” 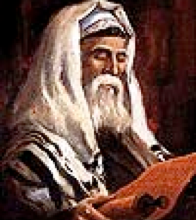 These are the only two translations of the New Testament where it specifically mentions “appointed time,” which is important because of the following:

“Is anything too difficult for the LORD? At the appointed time I will return to you, at this time next year, and Sarah will have a son.”

But what’s “appointed time” got to do with it? Doesn’t it just mean some random date God selected for the birth of John the Baptist and Isaac, the son of Abraham and Sarah?

In the Torah, the biblical festivals are called “appointed times.” According to one Jewish interpretation, “the appointed time” at which Sarah gave birth to Isaac was the first day of Passover:

And how do we know that Isaac was born at Passover? Because it is written, “At the appointed time I will return to you […and Sarah will have a son].” (b.Rosh Hashanah 11a)

In the Gospels, John the Immerser comes in the role and spirit of Elijah. Jewish tradition maintains that Elijah will appear at Passover to announce the coming of Messiah. For that reason, we read Malachi’s prophecy about the coming of the Messiah on the Sabbath before Passover, and Jewish homes set a place at the Passover Seder table for Elijah.

Lancaster covers two other traditions. One involving the Biblical record of Joseph and Mary traveling (supposedly) to Jerusalem to attend the festival of Sukkot, and they happened to be near Bethlehem when Mary went into labor. If Bethlehem were on the pilgrim trail to Jerusalem, the multitude of travelers going up to Jerusalem for the festival could account for all the “no vacancy” signs at the inns.

The other tradition has to do with assigning a double meaning to the phrase “the Eighth Day.” Of course, all Jewish boys were to be circumcised on the eighth day after birth, but the last day of Sukkot, which is actually a separate festival, Shemini Atzeret, is also referred to as the “Eighth Day.” This would mean Jesus would have been born on the first day of Sukkot and circumcised on the eighth day of the festival. Pretty neat timing.

Lancaster’s article goes on for another page or so where he quotes from a “medieval collection of anti-Christian Jewish folklore titled The story about Shim’on Kefa (Aggadta DeShim’on Kefa),” which may offer certain hints suggesting that the early Jewish believers could have commemorated the Master’s birth at Sukkot, but all in all, support for this perspective is very thin.

I’m not saying it couldn’t work out this way and I suppose it would be very symbolic if it did work out that Jesus was born on Sukkot, but in fact, we just don’t know. Evidence from the Gospels and from various Christian and Jewish sources simply do not provide enough light on this matter to bring it to any sort of resolution. Thus, for Christians and other Gentile believers involved in the Hebrew Roots and Messianic Jewish movements, we must find other reasons to celebrate Sukkot. Don’t worry, we have reasons enough, as one person said on my blog recently.

It is appropriate, not only that you have built the family sukkah, but also that you should participate in its celebration, as an anticipation of the prophetic fulfillment in the Messianic Era when the nations will come up to Jerusalem to celebrate this feast (or suffer drought), as described by Zacharyah. Indeed, Jewish tradition perceives reflections of a sort of Yom Kippur repentance and redemption for the non-Jewish nations in the Sukkot celebration.

As for Messiah, he temporarily lived among people once in the fragile shelter of a human body. Some day, he will return and be with us forever.

I’ve been reviewing some of my past Sukkot related blog posts and thought you’d find these interesting:

May you drink from springs of living water. Chag Sameach Sukkot!

Addendum: This conversation is continued in A Question of the Division of Abijah.