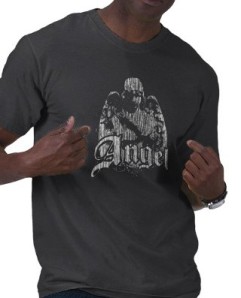 Israel here below is balanced by the angels on high, of whom it says: ‘Who makest thy angels into winds’ (Psalm 104:4). For the angels in descending on earth put on themselves earthly garments, as otherwise they could not stay in this world, nor could the world endure them. Now if thus it is with the angels, how much more so must it be with the Torah – the Torah that created them, that created all the worlds and is the means by which these are sustained. Thus had the Torah not clothed herself in garments of this world, the world could not endure it. The stories of the Torah are thus only her outer garments and whoever looks upon that garment as being the Torah itself, woe to that man – such a one will have no portion in the next world. David thus said: ‘Open thou mine eyes that I may behold wondrous things out of Thy Torah’ (Psalms 119:18); to wit, the things that are beneath the garment.

-Abraham Joshua Heschel
God in Search of Man : A Philosophy of Judaism (p. 267)

The LORD said to Moses, “Tell the Israelites to bring me an offering. You are to receive the offering for me from everyone whose heart prompts them to give. These are the offerings you are to receive from them: gold, silver and bronze; blue, purple and scarlet yarn and fine linen; goat hair; ram skins dyed red and another type of durable leather; acacia wood; olive oil for the light; spices for the anointing oil and for the fragrant incense; and onyx stones and other gems to be mounted on the ephod and breastpiece.

“Then have them make a sanctuary for me, and I will dwell among them. Make this tabernacle and all its furnishings exactly like the pattern I will show you. –Exodus 25:1-9

If you’ve spent any time studying the book of Exodus and particularly the instructions God gives Moses for making the materials and components to be used in constructing the Mishkan (Tabernacle) in the desert, you probably noticed the exquisite level of detail and craftsmanship required. In fact, it required God to endow special skills to specific people (Exodus 31:1-11) in order to accomplish all that was needed. Of the Levites, different families and clans were assigned individual tasks over building and taking down the many and various parts of the Mishkan and its contents, and carrying them from place to place across the span of the forty years of the wandering of the Children of Israel. It would have been an enormous, pain-staking undertaking to set up the Mishkan to perfect specifications each time the Israelites stopped, and to take it down and move it each time the Israelites journeyed onward.

Now compare that to how you built your sukkah a few days ago. My family has a rather modest sukkah that came in a kit. It measures a scant four feet by six feet and can hold just a few people at a time. It’s fairly easy to put the framework together and to attach the necessary straps, but the cloth that makes up the walls (with a built-in doorway and window) is rather cumbersome to manage single-handed. It attaches to the frame using Velcro which is and isn’t easy to work with. I used a makeshift crossbeam to hold up the “ceiling” and put up the string of lights with tape. It’s not the most beautiful sukkah in the world I’m sure, but I can manage to put it up by myself and, when the time comes, I’ll be able to take it down and pack it away alone.

On the other hand, it can’t possibly be anywhere as arduous a task as when Moses (according to Rabbinic interpretation) constructed the Mishkan for the first time by himself (Exodus 40).

Why am I comparing the Mishkan with my own humble sukkah? Technically, Sukkot isn’t about the Mishkan but rather, it’s about the tents the Israelites lived in during their time in the desert. We celebrate God’s provision in our lives in remembrance of how He provided everything the Children of Israel needed for their forty year trek through the Sinai. However, something Rabbi Heschel said in his aforementioned book (p. 287) made me compare the two.

Just as man is not alone in what he is, he is not alone in what he does. A mitsvah is an act which God and man have in common. We say “Blessed art Thou, Lord our God, King of the universe, who has sanctified us with His mitsvot.” They obligate Him as well as us. Their fulfillment is in not valued as an act performed in spite of “the evil drive,” but as an act of communion with Him. The spirit of mitsvah is togetherness. We know, He is a partner to our act.

When I read that passage, I recalled the effort of putting up my own small sukkah and realized I really wasn’t alone in constructing it. God was there with me. Although, as a Gentile, I’m not obligated to obey the commandments associated with Sukkot, my wife and children are Jewish and as  husband and father, the responsibility to build the sukkah is mine. I also have a number of reasons to associate Jesus Christ with Sukkot as living water (John 7:37-41) and as a living sukkah.

The word was made flesh and dwelled in our midst. We have beheld his glory, like the glory of the father’s only son, great in kindness and truth. –John 1:14 (DHE Gospels)

My earlier quotes from Heschel compared the Torah we have on earth and the “heavenly Torah”. This comparison is a “cautionary tale” of how we risk greatly misunderstanding God’s Word by treating as if it were only the inspired writings of men. In Jewish mystic belief, there is a Torah that we cannot possibly access; the Torah that was used by God to speak the universe into existence, the Torah that had to be reduced and “clothed” in “commonplace garments” just to exist in the world of human beings.

While this is midrash as much as believing that angels must somehow “transmogrify” in order to come to earth from heaven, it illustrates what I see as the relationship between one small sukkah and the Mishkan that amazingly contained God’s Shekhinah, the reduced and “humbled” essence of the Creator that can be expressed physically in our reality. I mentioned in my previous blog post that the “intent is to fill our sukkah, not only with heavenly guests, but with earthly ones as well, creating a meeting point and a joining between heaven and earth in joy and peace, in anticipation of the days of the Moshiach.”

In my previous blog, I suggested that we might “bend the rules” of the Ushpizin just a bit, to include an invitation for the Master to enter the sukkah, but if God helped Moses construct the Mishkan and then inhabited it, maybe I can dare hope that after God helped me build my sukkah, some part of Him rested, not just over it, but inside of it.

Until I read Heschel, I always thought of commandments as something God gave people so that people could obey God. Now I realize that the mitzvot belong to Him and well as us and that when we obey God, we are also working with God. I hesitate to say that God is “obligated” to obey His own mitzvot, but I can accept that for our sake, He voluntarily cooperates with us to do most of the “heavy lifting”. In retrospect, this is probably absolutely necessary not only to enable us to obey Him, but for us to even have the awareness of a relationship with God.

The little sukkah sitting in my backyard is dressed in plain and commonplace garments, made out of the ordinary materials of the world. By appearances, it’s nothing special and there’s nothing about it to attract the eye (Isaiah 53:2). But as the prophet Isaiah teaches, appearances can be deceiving and what is dressed in rags on earth is adorned in shimmering gold and bright linen in heaven.

They stripped him and put a scarlet robe on him, and then twisted together a crown of thorns and set it on his head. They put a staff in his right hand. Then they knelt in front of him and mocked him. “Hail, king of the Jews!” they said. They spit on him, and took the staff and struck him on the head again and again. After they had mocked him, they took off the robe and put his own clothes on him. Then they led him away to crucify him. –Matthew 27:28-31

I turned around to see the voice that was speaking to me. And when I turned I saw seven golden lampstands, and among the lampstands was someone like a son of man, dressed in a robe reaching down to his feet and with a golden sash around his chest. The hair on his head was white like wool, as white as snow, and his eyes were like blazing fire. His feet were like bronze glowing in a furnace, and his voice was like the sound of rushing waters. In his right hand he held seven stars, and coming out of his mouth was a sharp, double-edged sword. His face was like the sun shining in all its brilliance. –Revelation 1:12-16

Read more about the inspiration of Sukkot at Torah.org.

And as much as I hate to get “political” here, because it’s relevant, there seems to be a Sukkot sub-theme running in the “Occupy Wall Street” movement called Occupy Judaism. Not the most joyous of news, but it’s part of the “plain clothes” world that we live in.