For centuries, Jerusalem has been a holy place for Jews, Christians, and Muslims. It has been referred to as both the Center of the Universe and the Eternal City. Jerusalem has also been called the City of Peace despite the fact that it has often been the object of bloody battles over religion and territory.

Today, Jerusalem is a city within a city. Surrounded by Arab East Jerusalem and Jewish West Jerusalem is the ancient Old City, an area of some 220 acres. The Old City is encircled by walls built in the sixteenth century by the Ottoman emperor Suleiman the Magnificent. Visitors may enter the Old City through one of seven large gates.

Inside, the Old City is divided physically and culturally into four sections: the Jewish Quarter, the Muslim (Arab) Quarter, the Armenian Quarter, and the Christian Quarter. These divisions are not totally segregated, however, and include some overlap of cultures. Nevertheless, Jewish and Arab children go to separate schools…

In her affecting but message-driven debut children’s book, da Costa relays the story of two boys who live in Jerusalem’s Old City Avi in the Jewish Quarter and Hamudi in the Muslim Quarter. A fluffy white cat wanders between the homes of the two boys, relishing the scraps each feeds her. Then weeks pass without any sign of the cat, alarming each boy. Looking skinny and dirty, the cat at last visits Avi, who then follows her to Hamudi’s neighborhood, where the youngsters begin to argue, each claiming the cat is his. As a rare snowfall begins, the boys stop bickering and, fearing that the beloved animal will freeze, follow her through Jerusalem to a dark alley where they discover four kittens in a box. As the mother purrs loudly and rubs against the boys, they conclude, “She does not want us to fight…. She wants peace.”

-from the Publisher’s Weekly review of the same book
found at Amazon.com

Tales of the Messianic Era series

My wife checked this book out of our local library (along with a dozen other children’s books) for our four-and-a-half year old grandson, Landon. I took last Friday off of work and spent the day with the little guy. After arts and crafts at the library, lunch of (homemade) macaroni and cheese, two or three episodes of Jonny Quest (1964), Legos and other toys, we got down to the business of reading. Da Costa’s “Snow in Jerusalem” was one of the books he wanted me to read to him while he was enjoying a mid-afternoon snack.

I enjoyed reading the book and especially the feeling of actually walking the streets of the Old City between the Jewish and Arab quarters, but reading the Author’s Note at the very end stopped me cold. I realized that this was a book promoting peace, not just between the characters Avi and Hamudi in the book, but between peoples and cultures. That’s not a bad thing certainly, but there was a further undercurrent suggesting a perpetual sharing of all of Israel, sub-divided between Jewish Israel and Arab Palestine.

That’s a popular solution for the conflict between these two people groups, especially among political and social liberals, but it flies in the face of the Bible and I believe is an affront to God. To be clear, I don’t think peace between all the different people of the world is the affront, but I do believe carving up Israel into different chunks for different people like separating the white and dark meat of a turkey on Thanksgiving is.

The word which Isaiah the son of Amoz saw concerning Judah and Jerusalem.

Now it will come about that
In the last days
The mountain of the house of the Lord
Will be established as the chief of the mountains,
And will be raised above the hills;
And all the nations will stream to it.
And many peoples will come and say,
“Come, let us go up to the mountain of the Lord,
To the house of the God of Jacob;
That He may teach us concerning His ways
And that we may walk in His paths.”
For the law will go forth from Zion
And the word of the Lord from Jerusalem.
And He will judge between the nations,
And will render decisions for many peoples;
And they will hammer their swords into plowshares and their spears into pruning hooks.
Nation will not lift up sword against nation,
And never again will they learn war.

Come, house of Jacob, and let us walk in the light of the Lord. 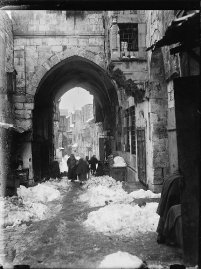 In reviewing various scriptures in the Tanakh (Old Testament) about the Messianic Era and the future King of Israel, I don’t see any references to taking the Land of Promise, which God gave to Abraham, and to Isaac, and to Jacob, and all of the physical descendants of that specific line (and notice Ishmael is not included, nor any of Abraham’s other sons) and splitting it up into Jewish and non-Jewish portions. The only “splits” of the Land involved the different areas given to the twelve tribes of Israel.

Messiah will come to return all of the exiled Jewish people to their Land and to rebuild Jerusalem as the Jewish city.

The Lord God, who gathers the dispersed of Israel, declares,
“Yet others I will gather to them, to those already gathered.”

These are just a few of the examples in scripture declaring that Messiah will gather the exiles of Israel and restore them to their nation.

Peace is a wonderful thing. So is fairness, equity, sharing, friendship, and the like. But how we imagine these general concepts and their application in Messianic Days may not be how they will really play out. Remember, whether you are Jewish or Christian, the Messiah is King, not President or Prime Minister. A Kingdom is not the same as a Democracy. Citizens of a Kingdom ruled by a single Monarch do not get to vote on laws, rules, and ordinances. The King’s Word is Law.

We all assume that everyone will get what they want in the Messianic Kingdom. Perhaps that is true, but I suspect for some people it will not be so. What if you’re a Muslim and the Jewish Messiah comes to rule not only Israel (all of Israel) as a Jewish nation, but the entire planet? For that matter, what if you are a Christian and you suddenly realize just how Jewish your “Jesus” really is? What if the King establishes without any equivocation that the Jewish nation is the head of all the nations (rather than the United States of America), and that the Torah is the Law of the Land for Israel and incumbent upon all of the Jewish people? What if some portions of that Torah go forth from Zion, and apply to all the people of the nations who are called by His Name (Amos 9:11-12)?

Don’t we get a vote on this? Don’t we have a say? How could this possibly be fair? Where is God’s justice?

There will be nothing else but God’s justice on Earth during the Messianic Age. People will get what they need but not always what they want according to the will of God. We will have peace. Our swords will be beaten into plowshares and our spears into pruning hooks, but only after Messiah has led a vast army to defeat all of Israel’s enemies (including, most likely, the United States of America). God Himself will fight for Israel, crush her adversaries, and establish her security.

The Lord will be king over the whole earth. On that day there will be one Lord, and his name the only name.

Are you getting the picture. The Lord will be one and His Name, One.

In that day the Root of Jesse will stand as a banner for the peoples; the nations will rally to him, and his resting place will be glorious.

He will raise a banner for the nations and gather the exiles of Israel; he will assemble the scattered people of Judah from the four quarters of the earth. 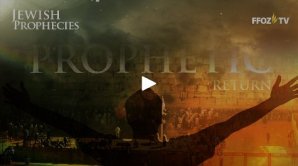 Not only will Messiah gather the Jewish exiles and restore them to Israel, but he will act as a banner for the rest of us, drawing us to him.

But remember, we won’t get a vote. This is Law.

The only and last functioning Theocracy (nation directly ruled by God) on Earth was ancient Israel before the people demanded that Samuel anoint Saul as King.

In the Messianic Age, that Kingdom, that Theocracy will be restored. A Davidic King, the last Davidic King will ascend the Throne in Jerusalem again, David’s Throne, which God promised to David and to his descendants forever.

For many, many centuries, Israel has been without a King, but it will not always be so. The King is coming. He will return. He will restore his people, the Jewish people, and all of humanity will go up to Jerusalem, and every knee will bow, to the Ruler, the Prince, the King, Messiah, Son of David, the Righteous Branch.

With respects to Deborah da Costa, while there will be peace within Jerusalem and her walls will forever be secure, it will not be the sort of peace established by a Jewish boy and an Arab boy arguing over possession of a cat and her kittens. It will be a brutally fought and hard-won peace where real adversaries will spill gallons of blood and mountains of dead flesh will decay in the sun and be eaten by carrion birds.

Enemies will be defeated in a war lead by a King whose rule is absolute. Peace will come when all of those enemies are dead, and the survivors of the nations defeated by Israel’s armies and by God must come to Jerusalem once a year to honor the King on Sukkot.

And then there will be peace. 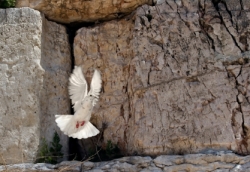 Peace comes when the Lord Almighty has spoken it, not when we have imagined some man-made utopia and think we can make it real just by publishing enough books, television shows, and movies based on that fantasy.

All that said, we can escape the fantasy and be part of building the way to Messianic peace now, at least a little of it. But we have to grasp onto the “fringes” of the garment of God, so to speak, humble ourselves, and speak the words of the coming Kingdom and the King who is to be. We can choose that path, or deny it and inherit a more terrible end.

“…and you will come up against My people Israel like a cloud to cover the land. It shall come about in the last days that I will bring you against My land, so that the nations may know Me when I am sanctified through you before their eyes, O Gog.”

That choice is ours to make. The King has been patient with us, but his patience will end, and we had better be ready when it does. We are either soldiers in his army or on the side that will see defeat. We will see peace in the Kingdom or find the peace of the grave. The Holy One of Jacob neither slumbers or sleeps.

And he is the King. We must bow or be broken.

Jerusalem has been called the Center of the Universe and the Eternal City. But it is also known as the City of David. One day it will truly be the City of Peace.

26 thoughts on “The Messianic Kingdom is not a Democracy”