I attended synagogue services on the holiday of Shavuot morning, and we spent a half-hour reading the Book of Ruth. Is there any special connection between Ruth and Shavuot?

The Torah and prophetic reading on Yom Tov always relate to a deeper theme of the day.

In this case, Ruth is the ancestor of King David, who was born on Shavuot, and died on Shavuot.

Another reason is because Ruth is the quintessential Jewish convert, and on the very first Shavuot – when the Torah was given at Mount Sinai – each Israelite essentially became a “Jew by Choice.” That’s why the Talmud and Code of Jewish Law use the Sinai experience as a basis for determining the requirements of all future converts:

2) Milah – Male converts must undergo circumcision, as the Israelites did before leaving Egypt (Exodus 12:48 and Joshua 5:5).

3) Mitzvot – All converts must accept to observe all 613 mitzvot of the Torah, as the Israelites did at Mount Sinai (Exodus 24:3).

Interestingly, the Torah intimates that the souls of eventual converts were also present at Sinai, as the verse says: “I am making [the covenant] both with those here today before the Lord our God, and also with those not here today.” (Deut. 29:13)

From “Ruth and Shavuot”
the Aish Ask the Rabbi column
Aish.com

In my recent review of the Mark Nanos essay “The Question of Conceptualization: Qualifying Paul’s Position on Circumcision in Dialogue with Josephus’s Advisors to King Izates” as found in the book Paul within Judaism: Restoring the First-Century Context to the Apostle (Kindle Edition), citing Nanos, I commented that the Apostle Paul was very much against the non-Jewish disciples of Yeshua (Jesus) converting to Judaism, frankly, because it was unnecessary. In Messiah, Gentiles have an equal communal status with the Jewish disciples, the same indwelling of the Holy Spirit, and the same promise of the resurrection.

The other major reason that Paul discouraged Gentiles from converting is that it would undermine God’s promise to Abraham that he would be the father to many nations. If we all converted to Judaism as a means of accessing a covenant relationship with God, then God’s promise that not just the Jewish people but all peoples would bow to Him, would be null and void. And as I hope you realize, it’s impossible to thwart the plans and promises of Hashem, God of Israel.

So is there any good reason for a Gentile in Messiah to convert to Judaism? There must be, because some few such converts exist (I have no statistics as to exactly how many there are or where they can be found and only personally know of one such person).

I also know that some critics of Messianic Judaism in the Hebrew Roots space believe that the practice of conversion is not presupposed in the Torah and thus is unbiblical, not to be recognized by those Gentiles who believe the Torah applies equally to all, Jew and Gentile alike.

However, as we see above, the Jewish people certainly do believe there is a precedent in the Torah that allows for ritual conversion of Gentiles, bringing them into Israel as (Jewish) children of Abraham.

Neither Christianity nor any branch of Judaism believes that Gentiles must convert to Judaism and indeed, Christianity sees converting non-believers to themselves is the desirable outcome, not becoming a member of the tribes, so to speak.

I also mentioned before that both in the late Second Temple period and today, those of us, that is, non-Jews who have some sort of connection with Judaism in general and Messianic Judaism in particular, often suffer from an identity crisis. More than once, the dissonance of who I’m supposed to be and what I’m supposed to do given my rather unique outlook on the Bible, has stirred a great desire in me to “throw in the towel” and stop associating with religious people altogether, both face-to-face and over the web.

It’s not an easy life. 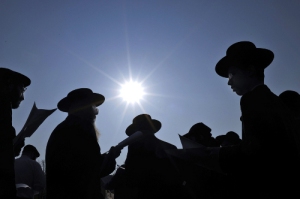 Some non-Jews entering Messianic community have shot out the other end, so to speak, and converted to (usually Orthodox) Judaism as a way to end that dissonance and secure a religiously and socially acceptable identity within Judaism. To do so however, they had to surrender all fealty to Yeshua as Messiah and King, thus, from Christianity’s point of view, becoming apostates.

I believe, both in ancient and modern times, that God gave the Jewish people the ability to be “gatekeepers” into their realm. Nanos spoke of a “chronometrical gospel”, that is, a time-related good news event or set of events, a good news that entered our world heralding the advent of the New Covenant promises with the birth, life, death, resurrection, and ascension of the Master, the Messiah.

Prior to Yeshua, there was a mechanism in place whereby Gentiles who were drawn to the God of Israel could undergo a ritual allowing them to join Israel and thereafter be considered indistinguishable from the born Israelite. It was the only real option for such Gentiles, apart from the status of God-Fearers who had no covenant status relative to God (unless you count the Noahide covenant).

The process of conversion seemed to morph over time and was likely different in some manner to the process we see Ruth undergoing to convert to Judaism and become the eventual ancestor to King David and ultimately, Yeshua.

No one should question the authenticity of David’s let alone Yeshua’s Judaism because a convert was their ancestor.

But as I said before, if converting to Judaism were the only way for Gentiles to apprehend the blessings of the New Covenant (let alone Sinai), then as I said above, God’s promise to Abraham would fail.

So through Messiah, another avenue was created, one that does not require we convert and become Israel. We are permitted now to come alongside Israel, not being them but being at the same table with them, partaking in the same blessings without being responsible for the same obligations. This makes it possible for the whole world to come to God, to be blessed by God, to attain the companionship of the Holy Spirit of God, and to receive the promise of a life in the world to come, all without conversion and all while remaining fully Gentile citizens of the nations.

In another Aish Ask the Rabbi column, the Rabbi states in part:

Being culturally Jewish, without belief in God, is compared to a cut flower. While it still retains much of its vitality, the flower has been cut off from its source of nutrition, and within a short time will wither and die. The ideals which have kept the Jewish people alive and thriving over the millennia – despite all odds – can only be transmitted with the framework that the Torah provides.

I’ve mentioned in this blog post and several others including this one, that we “Messianic Gentiles” actually have a very specific duty, that of encouraging and supporting Jews in Messiah (any Jew we may encounter, actually) to return to Torah and to more fully observe the mitzvot.

Without Jewish devotion to Torah, as the Aish Rabbi states, what God has preserved in the Jewish people will eventually fade…and without Israel, we Gentiles have no hope, because 100% of the promised blessings we receive God made with Israel, not us!

That’s why Yeshua is the King to the Jews first and only after, the King of the nations of the world. Whether the realization is comfortable or not, Israel is the gatekeeper, it guards all the doors, it holds all the keys, all through God’s covenants with Israel, and all through the person of Israel’s King, King Messiah, Son of David.

There may well be some valid reasons for Gentiles converting to Judaism, but they are all minimized within the Messianic Jewish realm simply because, as Paul pointed out repeatedly, it’s not necessary in order for a Gentile to have an authentic relationship with God. Particularly for the Gentile but also for the Jewish people, the cornerstone, the lynchpin to that relationship is Messiah. He opened the door that let the Gentiles into a full relationship with God, and he brought the very beginnings of what will someday be the completion of God’s New Covenant promises to Israel, and only through Israel, to the world.

We non-Jews should not dismiss or denigrate converts to Judaism, regardless of which branch they convert into, but we should rest assured that it is not a requirement either. This may be confusing relative to Gentile identity in Messianic community (which is why I suspect such Gentiles either covert to Judaism, return to the Gentile Church, or just give up on religion completely), but what Jews and Gentiles don’t yet understand about the non-Jew’s role and function among Israel, is well understood by God.

If I, as a non-Jew who studies within a Messianic Jewish framework, am never accepted as who I am, either by Gentiles or Jews, I can take comfort that in the privacy of my prayers and studies, I am still accepted by God. I can be a disciple and a Goy. I can be who I am. I don’t have to become someone else or pretend to possess another’s responsibilities to stand in the presence of the Almighty.

29 thoughts on “The Convert and the Disciple: A Shavuot Lesson”