Dayeinu is one of the highlights of Seder experience. The tune is catchy but the words and theme are frankly bizarre. Had you taken us from Egypt but not split the sea, dayeinu, it would have been enough. Really?

If you had taken us to Mount Sinai but not given us the Torah, dayeinu, it would have been enough. Really? Don’t we talk about how the Torah is the air that we breathe, indispensable to our lives and to our very existence? Had He given us the Torah but not brought us into Israel it would have been enough. Really? Wasn’t Israel created before the world because it, the Jewish people and Torah and the three pillars upon which the world is built?

-Rabbi Efrem Goldberg
“It Would Have Been Enough, Really?”
Aish.com

I have to admit, as many times as I’ve recited or sung Dayeinu, I’ve never considered the idea if stopping short of completing all the miracles Hashem did for the Children of Israel in the Exodus would indeed have been sufficient. What if God liberated Israel from Egypt but had not split the sea? That would have been a disaster.

As Rabbi Goldberg says, for religious Jews, the Torah is the very air they breathe, and the Land of Israel was promised to the Jewish people long before they were enslaved in Egypt. How could these things not come to pass as God declared they would? How can we imagine the Jewish people without the Torah or Israel?

But what about the rest of us?

I know what you’re thinking, some of you anyway. You’re thinking about the Mixed Multitude, that ragtag group of non-Israelites who accompanied the Children of Israel out of Egypt because they saw Hashem’s miracles and believed, or at least they thought this guy Moses could give them a “get out of slavery free” card, too.

You’re thinking that these Gentiles stood with Israel at Sinai and received the Torah along with God’s special and chosen people, and thus, what was done for Israel was done for Gentiles as well.

Well, yes and no.

The “Mixed Multitude” link I posted a few paragraphs above goes into it in more detail, but these Gentiles, or rather their descendants after the third generation, were fully assimilated and intermarried into Israel and the tribes, so all traces of their Gentile lineage was lost.

That practice isn’t available to non-Jews who want to join themselves to Israel today. The best we can do is either become Noahides or convert to Judaism. For those of us to call ourselves “Messianic Gentiles” or Talmidei Yeshua, a third option is to specifically accept a highly specialized understanding of the revelation of Yeshua (Jesus) as Moshiach (Messiah or “Christ”) while taking upon ourselves a lesser set of obligations than the Jewish people, and while standing alongside Israel and embracing her central role in Hashem’s plan for ultimate, worldwide redemption in the Messianic Kingdom.

Which brings me back to Dayeinu. What if God had given us the blessings of Messiah but not given us the Torah…Dayeinu…it would be sufficient.

But God did allow us, through His magnificent grace and the mercy of Messiah, to benefit from some of the blessings of the New Covenant promises but not the full obligation to the Torah mitzvot? Is that really sufficient?

Depends on your point of view.

Back in the days when I was attending a little, local Baptist church, more than once in Sunday school, I heard the teacher thankfully remark how grateful he was to not be “under the Law” and enslaved to all those spiritless rituals and practices.

Actually, he said he was grateful to “no longer be under the Law”. I’ve always wondered what Christians mean by that, since Gentiles are not born into a covenant relationship with God, and particularly not under the Sinai covenant, thus, we were never, ever “under the Law” to begin with.

I tried to argue the other side of the coin, so to speak, relative to the Jewish people, but this was a Sunday school class in a Baptist church in Idaho, so I certainly wasn’t going to convince anyone that the Torah could be “the very air Jews breathe, indispensable to their lives and to their very existence.”

There’s a reason I don’t go to church anymore.

I had considered using the “Dayeinu” message to explain that even though we non-Jews were not given the Torah as such, it would be sufficient, but then, I encountered a problem in Rabbi Goldberg’s article:

Rabbi Nachman Cohen in his Historical Haggada offers a fantastic insight. If you look at the Torah and in Psalms, chapter 106 in particular, you will notice that every stanza of dayeinu corresponds with an incredibly gracious act God did for us and our absolute ungrateful response.

Explains Rabbi Nachman Cohen, dayeinu is our reflecting on our history and repairing the lack of gratitude we exhibited in the past. Seder night we look back on our national history, we review our story and we identify those moments, those gifts from God that we failed to say thank you for. We rectify and repair our ingratitude and thanklessness through the years by saying dayeinu now. In truth, dayeinu, each of these things was enough to be exceedingly grateful for.

R. Goldberg uses examples such God taking the Israelites out of Egypt and them not being grateful (Deut. 1:27) and God feeding them with manna and them not being grateful (Numbers 11:1-6). Dayeinu then, as R. Goldberg explained above, is the Jewish effort to repair the historic lack of gratitude of the Israelites to God’s miracles during the Exodus. It’s a lesson to every Jewish child at the Passover seder to learn gratitude for all that God has done, does, and will do for Israel.

So how can I use Dayeinu as an example of it being sufficient for we Gentiles to have the blessings of the New Covenant (without being named covenant members) and not receiving the Torah or the Land of Israel along with the Jews?

I do it by turning things around. I do it by pointing out our own ingratitude. A small but vocal group of non-Jews do not accept that only the Jewish people are Israel, and that only the Jewish people have it placed upon themselves as named members of just about every covenant God has ever made with human beings, the full obligation and blessings of the Torah mitzvot. They not only desire but demand full inclusion into Israel, and full obligation to the mitzvot, effectively becoming Jewish converts without a bris.

I should point out that many normative Christians, who couldn’t care less about the Torah, still believe that when Jesus returns, the Church will inherit the Land of Israel and all of the covenant promises God made with the Jewish people. The Jews however, unless they convert to (Gentile) Christianity, not so much. That’s also a lack of gratitude and humility.

And He began speaking a parable to the invited guests when He noticed how they had been picking out the places of honor at the table, saying to them, “When you are invited by someone to a wedding feast, do not take the place of honor, for someone more distinguished than you may have been invited by him, and he who invited you both will come and say to you, ‘Give your place to this man,’ and then in disgrace you proceed to occupy the last place. But when you are invited, go and recline at the last place, so that when the one who has invited you comes, he may say to you, ‘Friend, move up higher’; then you will have honor in the sight of all who are at the table with you. For everyone who exalts himself will be humbled, and he who humbles himself will be exalted.”

It is better to take the seat for the least honored and then perhaps be given more honors, than to assume you have the greatest honor and to be publicly “demoted” and thus humiliated by your “host,” that is, Messiah.

In this case, us not being Jews, and not being Israel, it really is better to say “Dayeinu,” believe that what we have is truly sufficient, and if God wants to give us more, He’ll give us more. He’ll give, but we don’t presume to just take.

Ben Zoma says, “Who is rich? He who is happy with his lot.” 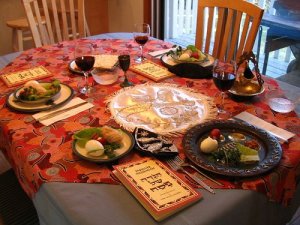 It is a terrible thing to turn up your nose at the blessings and mercy of God and to demand more. We’ve seen the consequences to the Children of Israel in the Torah when they were ungrateful. If they are the natural branches of the root and could still be removed for lack of trust, how much easier is it for God to remove the ungrateful grafted in branches?

My family will be having our own wee home seder this coming Friday. While my Jewish family will be singing Dayeinu in the spirit of learning gratitude as R. Goldberg describes it, I’ll be learning to be grateful in a very different way, by accepting that what God has done for me, a non-Jew, a non-covenant member, is indeed not just sufficient, but abundant.

34 thoughts on “You Gave Us Messiah But Not The Torah: Dayeinu!”