I came across a brief article on Rabbi Daniel Siegel’s blog called “When the Rebbe Asks: Renewing Ger Toshav,” which apparently is the topic of a soon to be published book. Actually, I found it posted on a closed Facebook group for “Messianic Gentiles”. This is the same group that has historically drawn a parallel between the Ger Toshav (“resident alien” in Jewish community) and the Messianic Gentile. I chronicled their perspective in a number of my blog posts including Not a Noahide (which I was subsequently reminded would better have been called “More than a Noahide”).

Although I no longer fret so much over issues of identity or praxis, there was something that caught my attention:

Reb Zalman favoured the renewal of the Ger Toshav as an alternative to a full conversion where it was clear that the person did not really want to become a fully practicing Jew. He wanted to see an alternative which honoured the person’s desire to be part of a local Jewish community at arm’s length.

This was a response to a problem noted in Judaism. When a Jew is married to a non-Jew, there traditionally has been two responses. The non-Jew converts to Judaism or the Jew ignores any Rabbinic direction and most likely falls away from Jewish community and practice.

An additional problem is noted in terms of the standards for practice that Jewish community holds for the Jewish convert. Often, in the author’s opinion and referencing Reb Zalman, said-observance of the convert is more lax, certainly not up to the standard of the presiding Rabbinic court. One example of this mentioned in the article is:

Some years ago, Reb Zalman challenged what he saw as too much leniency in our conversion process, to the point where he said that if we did not put a tallit kattan on a Jew by choice as he (in this case) emerged from the mikveh, then we had done nothing.

It was suggested that at least some of the converts did not truly desire to follow all of the mitzvot and converted for the sake of their Jewish spouse. 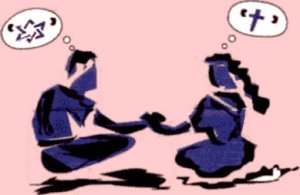 So is there an alternative?

Supporting the renewal of the Ger Toshav, a non-Jew who is already married to a Jew, who does not want to follow the mitzvot as a Jew, but who is in full support of their spouse’s involvement in Jewish community and praxis.

How does this apply to the aforementioned comparison between the Ger Toshav and the Messianic Gentile?

In my own small experience in Messianic Jewish and Hebrew Roots groups, it is fairly common for Jews and non-Jews to be intermarried. In fact, again in my experience, the sort of Jews attracted to Messianic Judaism or Hebrew Roots are either secular Jews or Jews who have adopted Christian practice and identity, and yet who also have a desire to reconnect to being a Jew.

The participation for many intermarried couples in Messianic Judaism or Hebrew Roots then, could be seen as a sort of synthesis between Christian and Jewish values and lifestyle.

Of course, I can’t speak for every intermarried couple involved in those movements, but when I was associated with those communities, that was what I saw.

Turning to my own situation as a non-Jew married to a Jew, in my case, my spouse is affiliated with normative Jewish community, specifically the Chabad and the local combined Reform/Conservative shul. She in no way can be considered as having any sort of association with Yeshua-worshippers or Christians (which is what she considers me). 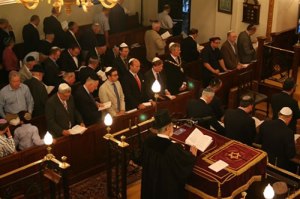 However, as quoted from the Preface of the Ger Toshav book (PDF), am I a member of this “community”?

There, almost the entire Jewish leadership was married to non-Jews whose spouses, in turn, were full contributors to the community’s life and supporters of their spouses’ involvement, yet choosing not to become Jews themselves.

Nope. That would imply that I’m involved in synagogue life with my wife and support her involvement from that platform.

However, combining “at arm’s length” with supporting my spouse’s involvement in Jewish life, I find a definition of myself, and by “arm’s length” I mean I stay away from her Jewish community completely.

This isn’t news to me. It’s just interesting to find this sort of thing recorded in modern Jewish literature.

As far as my wife’s level of observance, that’s entirely up to her. Frankly, I wish she were more observant, but as she once said to me (and rather pointedly at that), she doesn’t need my permission to be Jewish.

So I keep my nose out of her business in that arena. I also have surrendered anything that even resembles Jewish praxis since she would no doubt see it as “Evangelical Jewish Cosplay”. She even wonders why, outside the home, I still avoid bacon, shrimp, and other trief, which is just about my only remaining concession to my former lifestyle.

I’m sure a number of my former associates would be aghast to read those words (or perhaps they wouldn’t), but in some sense they were also the prompt, or part of it anyway.

I know the ideal is to create Messianic Jewish community by Jews and for Jews, and I continue to support that ideal, but it is my belief that the dream will not be realized until Messiah returns and draws his people Israel to him.

So where does that lead us?

For those non-Jews out there who adhere to the values and practices of being involved in Messianic Jewish or Hebrew Roots communities and who are not intermarried, not a lot. I’m sure your congregation has standards of behavior and practice for the non-Jews among them, so like any member of a congregation, you adhere to those standards or find someplace else to worship.

For non-Jews married to Jews and part of the previously referenced communities, it is likely you and your spouse share the same values and beliefs, and so there is little or no dissonance between you. Only in Messianic Jewish groups with a Jewish praxis approaching Conservative or Orthodox would there be any noticeable distinction between the observance of the Jewish and non-Jewish spouse (again, this is my opinion, your mileage may vary).

For you non-Jews who have community within a Christian setting and your beliefs are not widely accepted by your peers, you have a tough road to travel. I tried that for two years and ultimately got nowhere, though I learned a lot along the way.

If you are married to a more traditionally Christian partner, then what you experience may be similar to my own marital situation. You may share the vast majority of your lives with each other but there will always be a line neither of you may cross. The most important part of you becomes isolated from your marriage.

It’s a very dicey place to live. I know. I live there.

With neither support at home or community, you depend on the Holy Spirit alone to get to through each day while maintaining a relationship with God. If you’re married to a normative Christian, renouncing a Messianic perspective and taking up the mantle of traditional Christianity becomes the temptation.

For folks like me, it’s renouncing Yeshua entirely. Even if I did that, I doubt the missus would accept my adopting the Ger Toshav identity, so I’d still be alone in belief or disbelief as the case may be.

Assuming Hashem has control of all things, I wonder why He would sanction this perpetual walk along a sheer cliff. Or perhaps like the question, “why do bad things happen to good people,” it’s simply a matter of living in a broken world fallen far from God. These events occur because the King has yet to assume his throne in Jerusalem and take up his reign.

So like the rest of humanity living precariously and dancing madly on the edge of a razor blade, I and those like me just have to keep hanging in there.