It is not uncommon for a first-time visitor to fall in love with Yerushalayim. And the place most people feel most attracted to in Yerushalayim is the Kosel itself. When someone told Rav Yosef Shalom Eliyashiv, shlit”a, that many people who live in Yerushalayim do not visit the Kosel at least once in every thirty days, he was astounded. “That is like a man whose ailing mother lives in the same city as he does, who doesn’t visit even once a month! Just as being in such a position is obviously morally untenable, the same should be true about one who is able to visit the Kosel once a month but fails to do so.”

Yet many visitors—perhaps because they come from so far—understand that the Kosel should be visited as often as possible and envy those who live so close, who sadly often visit much less than they would like.

One man on a short trip to Yerushalayim was all broken up about having to go back home to America. “If only I could bring the Kosel with me, it wouldn’t be so bad. Why can’t they instantaneously transport me there every day for shacharis? I would have so much more composure and could much more easily cope with the pressures of the day.”

But of course this was impossible.

When a friend heard about his trouble he made a novel suggestion. “Why not take a small piece of the Kosel back with you? That way you will feel connected and just looking at it will bring you back to the good times when you were here.”

He was very impressed with this idea, but as a religious Jew he was afraid to take such a step without consulting with a posek.

When this question reached Rav Moshe Feinstein, he ruled that this is forbidden. “It is clear that even one who uses the stones of har habayis transgresses me’ilah; how much more so regarding a fragment of a stone from the Kosel itself!”

Daf Yomi Digest
Stories Off the Daf
“A Memento?”
Me’ila 15

They say that “familiarity breeds contempt,” so I suppose it’s not surprising that when you have a fabulous resource or experience just minutes from your front door, you might not take every opportunity to visit it. That’s why people who live in cities with wonderful museums containing priceless treasures don’t visit them on a regular basis (usually it’s only when out-of-town guests come to visit).

Therefore remember that at one time you Gentiles in the flesh, called “the uncircumcision” by what is called the circumcision, which is made in the flesh by hands — remember that you were at that time separated from Christ, alienated from the commonwealth of Israel and strangers to the covenants of promise, having no hope and without God in the world. But now in Christ Jesus you who once were far off have been brought near by the blood of Christ. –Ephesians 2:11-13 (ESV) 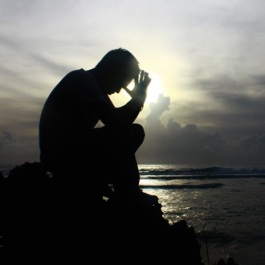 Examine the experience of someone who has just converted to Christianity, someone who was far off from God who has now been brought near by the blood and grace of Jesus Christ. That person is typically very excited and absolutely thrilled. He takes every opportunity to pray, to go to church, to go to a Bible study, to fellowship with other believers. He is a sponge, taking in every detail, every experience, every subtle nuance of being a Christian.

But sooner or later, the fire cools off. Since God is always near, how often do we visit Him? For some Christians, beyond going through the motions, not very often.

I suppose I should say at this point that this experience is common among people of all faiths, not just the church, but after all, the community of believers in the Jewish Messiah, is my primary audience.

But what about the rest of the story off the Daf? For those who truly appreciate what they can touch, how do you carry away a piece of holiness with you? In terms of the Kotel, you don’t. It’s an unspeakable crime to chip off a little bit of the wall and to carry it around with you as if it were a lucky charm. It’s not the stones themselves that impart holiness, it’s where they are built, why there were built, and what they represent. This doesn’t require that we literally carry a pebble or stone with us. But the man in the story was right in one important way. We do need to constantly carry holiness with us, no matter where we go. We need an anchor to hold us in place and to link us to God, as we are swept this way and that by the storms of everyday life.

We do not keep our traditions for the sake of the past but for their power to create a future, a power that will never end.

For the Torah was not given to this world so that it should return to its former glory, but so that it will transcend itself.

-Rabbi Tzvi Freeman
“Traditions of the Future”
Based on letters and talks of the Rebbe
Rabbi M. M. Schneerson
Chabad.org

One of the ways Judaism has carried holiness and a connection to God with them across history and no matter where they were living (having been driven out of one place and then another, and so on), was and is their traditions. Traditions themselves are not physical objects, though they can employ such objects, but they are concepts and ideas that represent love, faith, and devotion to God. You cannot carry a piece of the Kotel with you, but you can carry the desire to see Jerusalem in your heart. You can pray for the coming of the Messiah and the rebuilding of the Holy Temple. You can enter into prayer with a minyan and summon the presence of God within your midst.

What do we Christians carry around with us to transmit the sense of holiness?

Truly, truly, I say to you, a servant is not greater than his master, nor is a messenger greater than the one who sent him. –John 13:16 (ESV)

Go therefore and make disciples of all nations, baptizing them in the name of the Father and of the Son and of the Holy Spirit, teaching them to observe all that I have commanded you. –Matthew 28:19-20 (ESV)

We are not greater than the one who sent us, but we have been sent. We carry that Spirit and that mission within us and that sacred duty must never leave us. Many Christians think that only “official” missionaries take the Good News of Christ to the unbelievers, but even if we never overtly speak of our faith, if our behavior is consistent with the one who sent us, then we always declare our love of God and humanity by the one we carry around inside of us.

What is holiness? It’s not a thing you can hold and touch and feel. It’s not a candlestick or a kippah or even a Bible, although in their proper contexts, these objects are important or represent something important. Holiness is a spirit and an inspiration. It is God, not only among His people, but within His people. He is represented by our words and our actions, not just during worship and prayer, but as we go about our business in every hour of every day. That is what we carry and what anchors us to Him.

We are holy and sacred as emissaries (and we are all emissaries) and it’s not just what we have, but what we do that matters.

An emissary is one with his sender. This concept is similar to that of an angel acting as a Divine emissary, when he is actually called by G-d’s name. If this is so with an angel it is certainly true of the soul; in fact with the soul the quality of this oneness is of a higher order, as explained elsewhere.

We, as mere servants, are not greater than the One who sent us, but we are one in goal and purpose. We must not exalt ourselves beyond our station as believers and disciples, but we must take who and what we are very seriously, because not only God, but a desperate and suffering world is watching us at every moment, looking with diminishing hope for evidence that there is a loving God and that He can save.

Yet there is another message we can take away with us from the words of the Lubavitcher Rebbe; a lesson that may explain much, but cause some concern as well. The quote from the Rebbe recalls this event:

“Behold, I send an angel before you to guard you on the way and to bring you to the place that I have prepared. Pay careful attention to him and obey his voice; do not rebel against him, for he will not pardon your transgression, for my name is in him. –Exodus 23:20-21 (ESV)

It may amaze you that God told Moses that a mere angel could forgive sins, but then, if the Name of God is upon the angel, then the angelic being wears God’s Divinity like a shroud, acting for Him in all things, as if it were God Himself.

But we all know an angel is not literally God.

Jesus said, “I and the Father are one,” (John 10:30 [ESV]) and depending on how you interpret his words (and I’ve talked about this before), you may believe he was saying that he, Jesus, is literally and physically the same as God. This is a common belief and most people in the church, though they don’t understand it, do not doubt it for a second.

I don’t understand it either, but it’s something to ponder as we live out the will of the one who sent us.