This is how he scared those former One Law guys into reverting to racially-classed M.J. He tells the gentiles they are heretics on par with Korach if they go against the Rabbis. So they got scared and gave in. Good ol’ scare tactics.

But guess what, folks? If you believe Yeshua is G-d then you’ve already gone against the “Mosaic” authority of the Rabbis. You want you should be a more acceptable heretic to them? A more pleasing apostate?

…their view in simple terms is not only a form of apartheid, it is demonstrably anti-biblical. Folks like some of those in UMJC and in leadership at FFOZ may try, but they simply cannot smother the Torah lifestyle movement among HaShem’s elect. How sad for them.

I’m tired. My daughter had to be at work at five this (Sunday) morning so I had to get up at about a quarter to four so I’d be available to drive her. So as I write this (between 6:30 and 8 a.m.), I’m tired. Coffee doesn’t seem to be helping and I’ve got a full day ahead of me between watching my grandson, doing the lawn, including winterizing the trees, and hopefully being able to get to the gym.

But that’s not the only reason I’m tired. I’m tired of all the fighting in my little corner of the religious blogosphere. I’m tired of the backbiting, the demanding attitudes, the self-righteous attitudes, the “I have my rights” attitudes, and those people who think Jews are being racist because they feel that Gentiles (including Christians) aren’t Jewish.

So much for the united and loving body of Christ. So much for John 13:34 and 1 Corinthians 13. If we are supposed to be loving because God so loved the world, then obviously, we’ve failed miserably.

Regardless of whatever branch or variant of Christianity to which you find yourself attached, there always seems to be those people who can’t stand other Christians in different types of churches, who can’t stand people in their own congregations who disagree with them personally, and who barely can stand to live inside their own skin. It goes without saying that they can barely stand Jewish people or can’t stand them at all. And yet Paul said that Christianity is grafted into (in some manner or fashion) Judaism (see Romans 11:11-24).

In spite of that, I see (One Law) Christians calling Jews racist, which brings them frighteningly close to the old, lamented, historical church and its vitriolic supersessionism and anti-Jewish rhetoric that I hoped was rapidly fading from our ranks.

Boy was I wrong.

Rav Levi Yitzchok of Berditchev was known for his love and good will toward his fellow Jews always trying to assess the good in people rather than expose the bad.

That’s where we should be. Sadly, I find few of my fellow Gentile Christians who even aspire to be like Rav Levi Yitzchok.

I recently read another One Law Christian’s commentary (I don’t dignify the source by linking to it) who accused the Chabad of “brainwashing” someone (probably a Jewish someone) into rejecting Jesus. From a Christian point of view, that’s probably what it looks like and how it seems functionally, but from the Chabad’s point of view, they are “evangelizing” to the secular and apostate Jewish population (from their point of view) in a manner similar to how Christians see their mission to offer Christ’s salvation to the world.

I’m reasonably sure this is what convinced my wife to accept a more standard Jewish theology and what caused her to believe that Jesus couldn’t be the Jewish Messiah. I’m not happy about this turn of events because it places a wedge between how my wife and I see and understand God, but I can’t deny her the choice of understanding and accepting her Judaism on her own terms. I certainly don’t think she’s any more “brainwashed” as a Jew than I am as a Christian. I don’t see her as a racist because she believes that the Torah is for her and not for me. It’s not always an easy peace I’ve come to as far as this dynamic in my marriage is concerned, but it is a peace.

But every time I visit the blogosphere, I don’t find peace at all, but war.

Long has my soul dwelt with those who hate peace. I am peace; but when I speak, they are for war.

I’ve been debating within myself about what I should do, if anything, in response. More and more, the topics on my “meditations” have been in reply to this “war” I see happening within the confines of the Messianic Jewish and Hebrew Roots sphere of communication. I understand that the larger Christian community is not a peaceful one (in spite of John 13:34) but this is ridiculous.

While I’ve been trying to decide, in recent weeks, whether or not to return to a traditional Christian church to foster a sense of fellowship with other believers, I’ve come to the conclusion that going back to church won’t make things better at home or in me. I left my previous religious community because (in part) of the negative impact it caused on my wife and the embarrassment my being “One Law” caused her as a Jew. I had hoped that my departure would ease things enough so that I could participate with her in synagogue life, but I recently learned this was a vain hope. I have chosen to proceed hopefully forward anyway for the sake of cherishing her yiddisher neshamah, but that doesn’t mean there aren’t consequences to my decisions.

My original intent for this blog was to record my transition in theology and to learn to find my faith in a more traditional Jewish setting. But the anticipated outcome never happened, and now I realize, it never will. I’ve mentioned before that I will need to chart a new course, but while in an ultimate sense, Jesus is still the goal, the path to reach him, from where I’m standing, has become increasingly indistinct. It’s like realizing that I’m stranded in a forested valley and completely shrouded by a dense fog. I can’t see well enough to even tell which direction the trail leads. I can’t see how to climb out at all.

But in the dark all around me, I hear the sounds of battle, fighting, growling, and hostility. That would be the people who are backbiting, the “believers” with demanding attitudes, self-righteous attitudes, “I have my rights” attitudes, and those people who think Jews are being racist because they feel that Gentiles (including Christians) aren’t Jewish.

Is this all I’ve got to look forward to by continuing to participate in this online community? If so, where the heck can I find the Jewish Messiah in it? Among people who say they love Israel but who (seemingly) hate Jews; who accuse Jews of racism and brainwashing?

This blog was never intended to be an endless stream of my thoughts and feelings without a goal or destination in mind. It was intended to be a chronicle of my journey of faith, not a “war journal” describing battle after meaningless battle between people who supposedly all share the same Messiah and the same God.

Maybe I’m just tired and maybe I’ll see this all differently if I manage to get some rest, but these thoughts have been plaguing me for some time now.

I found a site that uses a simple bit of JavaScript to display a countdown from the present date and time to New Year’s Day 2013. 78 days seems as good as any time limit to give this journey of mine to reach a conclusion. I’m giving myself (I guess I can’t really give it to anyone else) 78 days from today, Sunday, October 14, 2012, to either find a way to come to terms with the baloney I’ve been describing or to pull the plug on this blog and possibly any public participation in Christian faith. I’m really tired of the fighting and I’m not 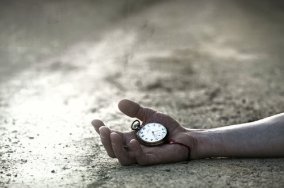 going to contend with any sort of anti-Jewish Christian (whether you call yourselves “One Law,” “One Torah,” “Two House” or anything else) “baloney” (imagine I’m using a much stronger term) for much longer.

Maybe I’ll wake up tomorrow, or next week, or next month, or the morning of December 31st (a Monday), and feel that I can go on writing meditations regardless of the fog or the clanging of sword and shield resounding in the mist surrounding me. Maybe I’ll wake up and find the fog has lifted and the din has ceased or at least traveled a good distance from me…or I’ll discover that the weapons of hostility and war simply don’t affect me anymore, and everyone else can just knock themselves out in their need to fight, while I can pass safely among them.

There are infinite worlds beyond ours and beyond the worlds of the angels, all full of divine light, beauty and oneness.

But know also that all this was brought into being with a single purpose: G‑d desires to be at home within your mundane world.

-Rabbi Tzvi Freeman
“The Purpose”
Based on letters and talks of the Rebbe
Rabbi M. M. Schneerson
Chabad.org

This is what I’m looking for or close to it.

Anyway, I’m giving myself 78 days to find it or to figure it out. I’ll continue writing “meditations” as I always have during that time period, but I’ll also continue to contribute to this “time-limited series” as a commentary on this branch of my journey of discovery. Where will I end up when January 1, 2013 rolls around? Stick around and see. I don’t even know the answer yet myself.