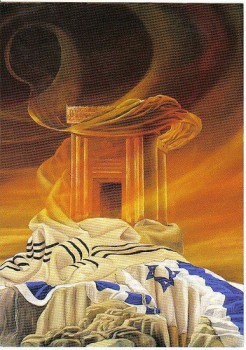 “Rebuilding the Temple”
Commentary on Tisha B’ Av
Aish.com

Belief in the coming of the Messiah has always been a fundamental part of both Judaism and Christianity. The Hebrew word for Messiah, Mashiach or Moshiach, means anointed, as does the Greek word, christos. Thus in Christianity, Christ is just another word for the Messiah. Much has been written about Jesus as the Messiah within the Christian realm, but little information has been publicized to the uninformed Jewish community concerning the coming of a Messiah, whom all we know about is that he will be a direct descendant of king David. Although Jesus has been proposed by Christianity to be such a descendant, Judaism does not accept Christ as their savior or king. Because the Messiah cannot be separated from God’s Third Temple and because God’s Third Temple is destined for all people…

“Coming of the Messiah”
ThirdTempleInfo.org

In some parts of religious Judaism, one of the very strongly held beliefs is that when the Messiah comes, he will rebuild the Temple on its original site in Jerusalem. In fact, Jewish “anti-missionaries” use the current lack of the Jerusalem Temple as “proof” that Jesus couldn’t have been the Messiah (since if he was, he would have rebuilt it 2,000 years ago).

More than that, according to the Judaism 101 website, the Messiah will do many important things.

Also, according to AskNoah.org, Gentiles will be able to worship in the rebuilt Temple.

Torah Law holds that Gentiles are allowed to bring burnt offerings to G-d in the Temple when it is standing in Jerusalem. There is a specific commandment to let us know that an animal (sheep, goat or bullock) offered in the Temple by a Gentile must be unblemished, to the same degree as the offering of a Jew. (Leviticus 22:25)

The same website citing the prophet Isaiah, declares that in the days of the Third Temple, Gentiles will be able to take on a greater role than in previous eras.

“And it will come to pass at the end of days that the mountain of G-d’s House will be firmly established, even higher than the peaks, and all the peoples will flow toward it as a river. And many nations will go and will cry, ‘Let us go up toward the mountain of G-d’s House, to the House of the L-rd of Jacob, and we will learn from His ways and walk in His paths, for out of Zion goes forth Torah and the word of G-d from Jerusalem.’ ”

But why am I writing about this?

It’s come up on more than one occasion at the church I attend, that certain things have changed because of Jesus. Since I’m kind of sensitive to the spectre of supersessionism (also called “replacement theology” or “fulfillment theology”), what has and hasn’t changed always gets my attention. Both in the Pastor’s message and in Sunday school, one piece of information I’ve heard is that before Jesus came, worship of God was confined to the Holy Temple in Jerusalem, and after the resurrection and ascension of Jesus, worship of God was no longer confined to a specific, geographic location.

You can see that this might present a problem if you also believed the Messiah was supposed to rebuild the Temple upon his return. Would that mean a step backward? Would our “freedom” to worship anywhere be revoked and Jerusalem once again become the locus for religious control and sacrifice to God? 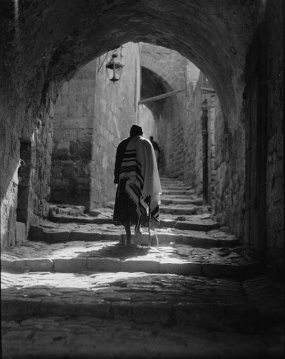 Well, yes and no. Frankly, it’s not that clear cut. We know that even during the Second Temple era, synagogues and centers for prayer (not always the same things) were available for Jews. After all, Jewish people were scattered not only all over Israel in those days, but across the civilized portions of the Earth. Recall the Ethiopian eunuch (Acts 8:26-40) who likely was a Jew on a pilgrimage to Jerusalem. It would have been difficult for most of world’s Jewish population to travel to the Jerusalem Temple every time they wanted an encounter with God. It was very likely that there was provision for both individual and communal prayer for Jews, so the Temple wasn’t literally the only place of worship.

Of course to obey the mitzvot, Jews were obligated to travel to Jerusalem on certain occasions including the moadim and particularly for Rosh Hashanah and Yom Kippur, but while extremely important, it wouldn’t have been possible for all Jews because it would require leaving home and undertaking lengthy journeys several times a year. While we don’t have much information on him, it’s likely that the Jewish Ethiopian had made only one 1,200 mile long trip between his country to Jerusalem when Philip encountered him. In those days, a trip of such length over land could have taken up to two months, so it wasn’t the “quick dash” it would be by car or plane in our day and age.

Also, looking forward, we have this.

It would be very difficult for the representatives of all of the nations of the world to observe Shavuot (Feast of Booths) in Jerusalem if there were no existing Temple.

It is true that John writes in Revelation 21:22 that he saw no Temple in the city, presumably New Jerusalem, but there are vast periods of time being described in his recording of his vision, so we can’t use that one verse as evidence that the Third Temple will never be built by Messiah after his coming (return).

So what’s the big deal?

Only that the birth, life, death, resurrection, and ascension of Jesus the Messiah may not have (permanently) changed as much as we might think it did. The church may ultimately have to integrate a more Jewish perspective of Messiah than we previously have. Yes, many of us think we’ve done a pretty good job at “rediscovering the Jewish Jesus,” but I don’t think the majority of us have truly engaged the reality of what that actually means.

I’m not criticizing Pastor Randy or anyone at the church I attend (and I know Pastor Randy sometimes reads my blog), but I am suggesting that at least in this one area, Christ may not have changed what we think he changed. Unfortunately, many Christians take the idea of what Jesus did to Judaism a little too dogmatically and treat Jews, Judaism, and Jewish Holy sites quite poorly, as this commentary I received on Facebook attests.

I have been at the Wall, Jews Holiest Place, and seen bus loads of tourist arrive. Even I cringed at the sight of shorts, halter tops, men with out shirts, cameras and water bottles in tow. I have seen the garbage left behind. I have heard the ‘chatter’ at the Face of the Wall and observed the frivolity of trying to place a paper prayer ‘for a friend’ in the highest unreachable crack. (a paradise for rock climbers). I have heard prayers for ‘the Jews to be saved”….I have stood by women ‘claiming the place in the name of Jesus”.

Jerusalem, to include the Wall, is not an International place of holiness. Once the sacredness of the place is removed it becomes one more place to be trashed. The fact that the Reform movement, Women at the Wall and other such groups are irritated that ‘they’ can not make the rules and regulations simply indicates their dislike for the Ultra-Orthodox. One side may be Extreme but the otherside opens the door to Liberal attitudes and the slippery slope to “so what, this is just another wall!” 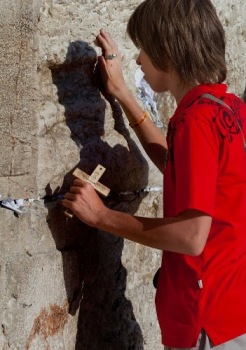 The analysis seems kind of harsh but then again, it’s probably justified given how casually and callously some people treat this Jewish Holy place.

To you and me, the Kotel may not have the same meaning, but for most religious Jews (and Jesus and all his apostles were and are religious Jews), it is all that’s left of where once the Divine Presence of God dwelt among His people Israel. It is also a symbol of hope in the coming of Messiah, the redemption of Israel (which doesn’t mean quite the same thing in Judaism as it does in Christianity), and the return of hope, life, and peace for the Jewish people and in fact, for all the nations of the Earth.

If it also happens to be the site of where the Christ will rebuild the Temple and establish his reign as our King, shouldn’t we at least try to respect it’s holiness? I know that in Christianity, we consider each believer to be a “Temple” containing the Holy Spirit, and we tend to look at ourselves as replacements for the physical Temple, but this “human Temple” imagery doesn’t preclude the future existence of a Third Temple. We tend to think that something is either this or that, left or right, one or the other, as if we are computers communicating in binary language, but since we’re dealing with God here, is it too difficult to believe we can be (metaphorically) a “Temple” and the physical Temple will one day be rebuilt by Messiah? Is it too much to ask for both?

20 thoughts on “Messiah and the Temple of God”