I’m actually enjoying going to church. When I came to that realization last Sunday, no one was more surprised than I was.

Starting last October, I created a “Days” series that was a countdown to the end of the year. I was planning to make a decision, both about whether or not to go back to church and whether or not to continue to blog in the “Christian” or “Messianic” or “religious” space, given the endless contention occurring in the blogosphere. I started at 78 days and worked my way down to zero. It should be obvious that I continued blogging after January 1st, and I not only continued to go to church regularly, but frequently meet with the Head Pastor.

Eleven months to the day before I published “Day Zero,” I wrote and published an article called Why I Don’t Go To Church. This was in response to both my internal angst (my favorite theme) and to Pastor Jacob Fronczak’s blog post Why I Go To Church. Even back then, I had returning to church in mind, but was undergoing what I’d consider classic approach-avoidance conflict (I was a psychotherapist and family counselor back in the day).

I’ve overcome my “fear of flying,” so to speak, but I was afraid that once I started attending church, I’d find not “niche” of my own and end up being bored. While it’s true, I don’t go to my particular church for the music, I am experiencing many other benefits and even on some small level, beginning to give back just a tad. What added momentum to my journey happened just five days before my countdown was to end. I was reminded that seeking fellowship with God’s people is seeking an encounter with God.

And in church, I have encountered Him.

Today, I did something I shouldn’t have done. There’s a “community” within Google+ called “Messianic Judaism” (for all I know, there could be more than one, but this is the one I belong to). Access is by invitation only, so posting a link to it wouldn’t let you see inside, but someone in the community posted a link to a book review and asked for opinions. Unfortunately, it struck a nerve, and even though I had already determined I wouldn’t address the review and what I believe it represents, I shot off my big mouth (figuratively speaking) and now I’m regretting it.

But the transaction had an interesting side effect. It (or rather someone) challenged my going back to church and further, criticized the church in a manner that resulted in my feeling defensive. Me? Really?

I’ve maintained a relationship with blogger Judah Himango for the past few years, and that relationship has, on occasion, been quite stormy. We still talk online periodically, and today was one of those “talks.” But what he said got under my skin. Here’s part of what he posted to me.

My concerns with Tent of David are that it purports to “heal the vision of the Messianic gentile” by sending them back to the church, which will inevitably lead to assimilation.

I asked, “assimilation into what?” and he responded:

Assimilation into the doctrines of the Church. Sabbath is done away with, the Church has replaced Israel, any non-moral mitzvah is no longer applicable to anyone.

Unfortunately (mea culpa) I missed a part of what Judah had said before I rapidly posted my reply (I think I need to switch to decaf):

I certainly don’t advocate compelling people to “go to church” if they feel called elsewhere, but on the other hand, I do object to the church being seen as “inferior” or “anti-Biblical” compared to non-Jewish Christians who feel called to worship within a more “Jewish” framework. I’ve been one of those people before and for reasons too lengthy to relate here, I needed to seek my community of faith elsewhere.

Why do I go to church?

First of all, thanks to Boaz Michael and (my advanced reading of) his book Tent of David (TOD) and other influences, not the least of which is my Mom, I summoned the courage to overcome my own personal prejudices and start attending church again.

I was welcomed by lots and lots of people, but you’d kind of expect that in an authentic Christian setting. But what happened next, was unanticipated…I started making connections. I’ve had several interesting and compelling conversations with the Head Pastor and just last Sunday, I spent an hour talking to one of the Associate Pastors (when I should have been in Sunday School) in the church library. Not only that, but a number of people actually seem authentically glad to see me, not just because I’m a warm body showing up a church, but because of me as the person I am (or at least as they perceive me to be). In fact, I’m stunned that some of these connections have occurred so quickly and that I’m now even feeling a sense of belonging.

People have offered to pray for me. I’ve seen genuine caring and concern for the hungry, the sick, and the dying. They offer tangible, material support for the needy and for missionaries in many countries. There is a genuine heart for Israel and a desire for her posterity. It’s not just the occasional person, but to the best of my ability to tell, the human community within the church’s walls does look to Christ as Messiah and Israel’s King for salvation and sustenance.

In my talks with Pastor Randy (and they’re really quite candid), we don’t always see eye to eye, but you can’t believe what an incredible pleasure it is, even to disagree with someone and still have the encounter be illuminating, positive, refreshing, and friendly. Try doing that on the Internet!

I don’t know where all this is going to lead me, but for the first time in a long time, I not only have hope that I will find a place in the church and among the community of believers, but that the church itself is turning in a direction that will indeed be part of the healing between the Jewish and non-Jewish disciples of the Master.

I feel that I’ve failed in my comments on Google+ today and allowed my emotions to overcome my common sense. I could delete my comments, but they’ve already been read and responded to, so I might as well leave them up. In any event, God knows what I’ve said and done, so removing my annoyed comments won’t repair my relationship with Him.

But the realization, thanks to Judah’s statements (though he probably didn’t intend them the way I’ve taken them), that there really is hope for Christianity and a way forward in being part of “rebuilding David’s fallen tabernacle” is encouraging. It’s even better now that I realize it’s possible for me to have a small part in that “project” within the community of Christianity.

I don’t particularly mind if people don’t agree with my going back to church, and I understand that whenever you write and publish a book (such as Boaz Michael has), especially in such an emotionally explosive realm as religion, people are going to write critical book reviews. The only thing I mind about some of the criticism being leveled against Tent of David (and yes, I’ve read the reviews), is that it simply misses the overall vision Boaz is trying to communicate. I can appreciate people who have an eye for detail, and who may feel certain specific terms or other content wasn’t used with as much accuracy as they could have been, but look at the big picture.

In between the Gentile Christians going to church and those who have found a home in either a Hebrew Roots or Messianic Jewish congregation are just tons and tons and tons of people with little or no fellowship at all. Maybe they attend small home Bible studies or maybe they just worship with their families. Some, like me, may even seek fellowship over the Internet (which is problematic at best). But remember, seeking fellowship is seeking an encounter with God, and in my experience, many people who think of themselves as “Messianic Gentiles” are disconnected and isolated from other believers and, Heaven forbid, from the God who loves their souls. 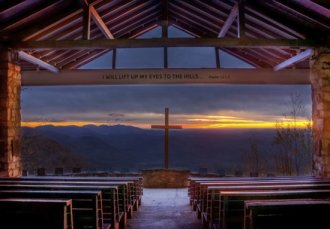 Through bad teaching, bad leadership, or bad experiences, they’ve become convinced that “the Church” (whatever you imagine the term to mean) is bad, evil, awful, pagan, lost, apostate, anti-Law, and so on…I mean all Christian churches everywhere. And, for whatever reasons, they haven’t found an alternative or the alternative that they’ve found may be a group that defines itself solely on being “anti-Christian,” as opposed to a community dedicated to discipleship under Jesus Christ and a sincere desire to meet with God.

If even some of those people can find in Tent of David what I have, then maybe they don’t have to be alone, either. I don’t think you have to agree with each and every thing Boaz set forth in TOD, but you can embrace the vision and let it take you where God wants you to go.

I am beginning to “fit in” with this church. I probably wouldn’t fit in at most other churches in my area. The fact that a set of unlikely occurences led me to this church as the first stop in my search for community I believe indicates the hand of God at work in my life.

That’s not all about why I go to church…but it’s a start.