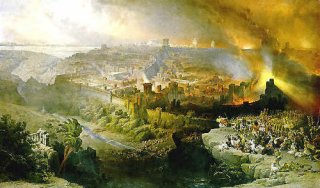 This is a continuation on the topic I started discussing in Lancaster’s Galatians: Introduction, Audience, and What Happened to the Torah? and continued in Broad Strokes. I asked the first two of these four questions in Part 1 and Part 2 of this series. Part 3 presents the third question. Hopefully, the answer will be illuminating.

Just a reminder, all quotes from scripture will be from the ESV Bible unless otherwise stated.

Were the Jewish Apostles of Jesus Supposed to Remain in Jerusalem During the Fall?

History records that the Romans destroyed Herod’s Temple and exiled the Jews from Israel in the year 70 of the Common Era (CE). Israel was renamed “Palestine” by the Romans as in insult to the Jews. We also know that there was always a small remnant of Jewish people in “Palestine” from that time until the formation of the modern state of Israel in 1948. But of those who remained in Jerusalem and in the Land during and just after the destruction of the Temple, how many were disciples of the Master?

The destruction of the Second Temple in 70 CE and the subsequent expulsion of the majority of Jews from what would be called Palestine marked a disastrous shift in the Jewish authority over the Messianic community. Up until that time, the head of the Jerusalem leadership of the Messianic community, otherwise referred to as “the bishop of the church”, had always been Jewish. Once the Jews were expelled from Jerusalem by Hadrian, for the first time a Gentile had to be elected into the role. As events moved forward from that point in time, the Gentile presence in the Messianic community grew dramatically while the Jewish leaders and worshipers of Yeshua struggled under the heartbreak of the loss of the Temple and the ejection from their land.

I bring all this up because one of the topics Pastor Randy and I discussed was whether or not the Jewish disciples of the Way “abandoned ship,” so to speak, when the rest of the Jews were expelled from Israel at this point in history. It’s Pastor’s opinion that they did and that it was definitely the wrong thing for them to do. In his opinion, they should have stayed.

I don’t know if Pastor is suggesting such a thing. Dying, down to the last man as martyrs, may have been a dramatic move and even a faithful one, but it would not have allowed the apostles to survive and to spread the word of Moshiach to the Jews and Gentiles of the diaspora.

I remember when Pastor was delivering a sermon on the death of Stephen (see Acts 7:54-60) and the consequences that followed his demise.

And there arose on that day a great persecution against the church in Jerusalem, and they were all scattered throughout the regions of Judea and Samaria, except the apostles.

According to Pastor, one of the effects of the scattering of devout Jewish believers away from Jerusalem was to allow the spreading of the gospel message throughout Judea and Samaria. This is how I see one of the results of the destruction of Jerusalem and the great exile of the Jews to the diaspora. Not that Paul had been unsuccessful in taking the message of the Messiah to much of the then civilized world, but this “allowed” (though it was a terrible thing) all or most of the believing Jews in the Land to take who they were and extend that into the galut to other Jewish and probably Gentile communities.

Did Jesus ask or require the believing Jews to stay in Jerusalem during this time of great tragedy?

“But when you see Jerusalem surrounded by armies, then know that its desolation has come near. Then let those who are in Judea flee to the mountains, and let those who are inside the city depart, and let not those who are out in the country enter it, for these are days of vengeance, to fulfill all that is written. Alas for women who are pregnant and for those who are nursing infants in those days! For there will be great distress upon the earth and wrath against this people. They will fall by the edge of the sword and be led captive among all nations, and Jerusalem will be trampled underfoot by the Gentiles, until the times of the Gentiles are fulfilled.

It seems clear that Jesus was telling those who are in Judea to flee to the mountains. Also, those who are inside the city depart, and let not those who are out in the country enter it. He knew that many [would] fall by the edge of the sword and be led captive among all nations. Nowhere in that short narrative do I hear the Master telling anyone to stay and die. In fact, it was necessary for Jerusalem to be trampled underfoot by the Gentiles, until the times of the Gentiles [were] fulfilled.

I don’t know if the times of the Gentiles are fulfilled yet, but the modern nation of Israel has been in existence for over sixty years now, so if our time isn’t yet up, it soon will be.

I mentioned before, in quoting from my “supersessionism” article, that up until the destruction of Jerusalem, every leader of the Council of Apostles had been Jewish. When the Jews were expelled, the first “bishop of the church” had to be a non-Jew since at that time, they were “flying below the radar” of the Romans, so to speak. It’s not unlike the situation with Lydia and the devout God-fearing women in Philippi.

So, setting sail from Troas, we made a direct voyage to Samothrace, and the following day to Neapolis, and from there to Philippi, which is a leading city of the district of Macedonia and a Roman colony. We remained in this city some days. And on the Sabbath day we went outside the gate to the riverside, where we supposed there was a place of prayer, and we sat down and spoke to the women who had come together. One who heard us was a woman named Lydia, from the city of Thyatira, a seller of purple goods, who was a worshiper of God. The Lord opened her heart to pay attention to what was said by Paul. And after she was baptized, and her household as well, she urged us, saying, “If you have judged me to be faithful to the Lord, come to my house and stay.” And she prevailed upon us.

The Jewish population in that area had been expelled at some earlier point, but the God-fearing Gentiles were “under the radar,” and not included in the exile from Philippi because they had not been counted as Jews, even through they had been worshipping in the synagogue with Jews, praying with Jews, discussing Torah with Jews, and otherwise having fellowship with Jews. When Paul and his party came upon Lydia and her companions by the river, he must have understood that these Gentile women were all who were left of those devoted to Hashem to keep the worship of the God of Israel alive in that community. Perhaps the same can be said of the Gentile believers in Jerusalem after 70 CE, but it’s hard to tell.

There has always been a Jewish remnant in Israel for the past 2,000 years. When the Temple was utterly destroyed, when the golden menorah melted and flowed like water, when Jerusalem herself moaned in agony like a woman in hard labor, after all these things, who is to say if, among the Jewish remnant, there were followers of Yeshua HaMashiach or not. There’s no way to know.

I don’t think the Messianic Jews had a specific mandate to stay and endure the incredible suffering of Israel’s downfall under the Romans. If some did stay, so much the better, but I believe what happened was supposed to happen. I think God knew. I think the words of Jesus tell us that he expected it and expected those who listened to him to flee. The time of the Gentiles was upon them.

But that time is running out fast.

Only one more question left. Be here for Part 4 in the conclusion of this series in tomorrow’s “morning meditation.