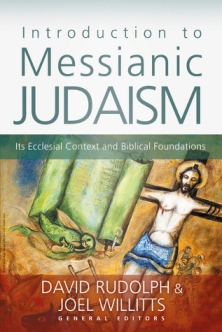 Similarly, New Testament scholars have long-held that the Jerusalem community headed by Ya’akov/James was (1) primarily composed of Yeshua-believing Jews who (2) remained within the bounds of Second Temple Judaism and (3) lived strictly according to the Torah (Acts 15:4-5; 21:20-21). Michael Fuller, Richard Bauckham, Craig Hill, Darrell Bock, Robert Tannehill, and Jacob Jervell are among the many Luke-Acts scholars who maintain that the Jerusalem congregation viewed itself as the nucleus of a restored Israel, led by twelve apostles representing the twelve tribes of Israel (Acts 1:6-7, 26; 3:19-21). Their mission, these scholars contend, was to spark a Jewish renewal movement for Yeshua the Son of David within the house of Israel (Gal 2:7-10; Acts 21:17-26).

I very recently discovered this book in the “New Books” section of my local library. When I saw it, I immediately checked it out (on Thursday) so that means I have only two weeks to read it before I have to return it (no renewals for new books). I was pretty excited to find this book in my local library system (which covers several counties in Southwestern Idaho) since I’ve never seen any book that could remotely be called “Messianic” in our collection of libraries before. Congratulations Rudolph and Willitts for “breaking the barrier,” so to speak.

But what made me write this “meditation” based on the Introduction and Chapter 1 of this book was the focus on a topic that has been near and dear to my heart these past few months: the ancient Messianic Jewish world and how it impacted newly minted Gentiles disciples of the Jewish Messiah.

You all know the argument. In Acts 15, what exactly did James and the Council do? Did they cancel the Torah for all disciples of Jesus or only for the Gentile disciples? Opinions vary widely (and sometimes wildly), with most Christians seeing the chapter as the final death knell of the Torah and a minority Hebrew Roots group stating that it was the foundation of universal Torah obligation for everyone.

Messianic Judaism as I’ve come to understand the movement, somewhat splits the difference.

As F. Scott Spencer points out, “The representatives at the Jerusalem conference – including Paul – agreed only to release Gentile believers from the obligation of circumcision; the possibility of nullifying this covenantal duty for Jewish disciples was never considered.” If the Jerusalem leadership had viewed circumcision as optional for Yeshua-believing Jews, there would have been no point in debating the question of exemption for Yeshua-believing Gentiles or delivering a letter specifically addressed to these Gentiles. Michael Wyschogrod rightly notes that “both sides agreed that Jewish believers in Jesus remained obligated to circumcision and the Mosaic Law. The verdict of the first Jerusalem Council then is that the Church is to consist of two segments, united by their faith in Jesus.”

Sometimes when I’m having these debates with Pastor Randy in his office, I feel like it’s just him and me (well, it is just the two of us) with my tacit partner being D. Thomas Lancaster, since it is his book we are using as the object of our talks. In finding the Rudolph/Willitts book suddenly available to me, it’s a little like finding gold or a golden information treasure trove that links back to numerous, scholarly information sources, all supporting the basic belief that the ancient Jewish believers in Jesus (Yeshua) never saw being released from circumcision and Torah observance as an option. The only question on their minds was whether or not the Gentiles had to be circumcised and thus obligated to said-Torah observance as Jews.

It’s no secret that I depend on First Fruits of Zion (FFOZ) as my primary information repository for all things Messianic (and by inference, all things Christian), but no matter how reliable a source they may be, they are still one source. It’s sort of like putting all my eggs in one basket. I know better than to believe a single source of data without searching for corroborating support. While the authors and contributors of the “Introduction” book (Rudolph and Willitts are the primary authors of the book, but there are multiple, scholarly contributors as well, so the book reads like an anthology) share many of the views espoused by FFOZ, they don’t share all of them, and that variability lends itself quite well to my corroboration requirement. Do other scholars in the Messianic and Christian academic spaces support the basic belief of early believing Jewish adherence to the Torah that was considered normative and not anachronistic or transient, and do they also share the belief that Gentile disciples were united with their Jewish counterparts in the body of Messiah without having to ever accept obligations to Torah observance that were identical to Jewish observance?

I’ve only read the Introduction and Chapter 1 of the Rudolph/Willitts book as I write this, but so far, the answer is a resounding “yes.”

They lived like other Jews. their houses were indistinguishable from the houses of other Jews. They probably observed as much of the Torah as did other Jews (though they would doubtless have rejected, as many others did, the distinctively rabbinic interpretations of the misvot). They studied Torah and developed their own interpretations of it, and, following the practice of the Apostles, they continued to perform a ministry of healing in the name of Jesus….[T]hey seem to have continued to attend their local synagogues on Sabbath. They may have attempted to influence the service of the synagogue, even to the extent of trying to introduce into it the Paternoster [the Lord’s Prayer], or readings from the Christian Gospels, or they may have preached sermons which offered Christian readings of the Torah. The rabbis countered with a program which thoroughly “rabbinized” the service of the synagogue and ensured that it reflected the core rabbinic values.

According to Rudolph, this is a description of Jewish believers who lived in the Galilee during the Tannaitic period or during the first two-hundred years (or so) of the Common Era (CE). In other words, according to Alexander, Jewish believers in Messiah continued to live as observant Jews after the lifetimes of the original Jewish Apostles of Christ.

I know I’ll get some criticism on a couple of points: the first being “circumcision” since it’s not Biblical as a means of conversion from being a Gentile to being Jewish (it certainly is Biblical in terms of the Abrahamic covenent which was re-enforced for the Jewish people by the Mosaic and New Covenants). I’m not going to get into a big argument. The Torah doesn’t presuppose circumcision as a sign of conversion because in the days of Moses, it wasn’t possible to convert to Judaism. One does not convert to a tribe or later, to a clan. By the days of the Maccabees forward, tribal and clan affiliation as a primary definition within national and covenantal Israel had been lost and Jewish religious authorities halachically introduced the process of allowing Gentiles entry into the covenants through ritual conversion.

Woe to you, scribes and Pharisees, hypocrites! For you travel across sea and land to make a single proselyte (convert)…

Even Jesus accepts that the Pharisees and scribes (scribes can include other sects of first century Judaism including Essenses and Sadducees) were converting Gentiles to Judaism.

The second point of criticism I’ll receive is how I believe that Jewish but not Gentile believers were obligated to full Torah observance as a result of the Acts 15 ruling (I’d receive a different criticism from most Christians by my belief that the Jewish apostles and disciples remained “under the Law”). See the earlier quotes in this blog post plus my six-part Return to Jerusalem series for my opinion and text supporting said-opinion on this topic. Again, I don’t want to spend a lot of time on this point. I have something more important to talk about.

The beginnings of this book go back to England. Joel Willitts and I met as PhD students in the New Testament at Cambridge University, where we studied under the same supervisor…

Joel and I became good friends and found that much mutual blessing took place whenever we had conversations about the Bible and theology. I valued Joel’s perspective as a Gentile Christian and Joel valued my perspective as a Messianic Jew. There was a synergy in our exchange that often led to fresh insights and unforeseen avenues of theological inquiry. My experience at Tyndale House with Joel and other Gentile Christian friends taught me that there is indeed a God-designed interdependence between Messianic Jewish and Gentile Christian ecclesial perspectives, and that one without the other is woefully inadequate.

Those were magical days in Cambridge. Joel and I talked about what we wanted to accomplish after we completed our doctoral programs and agreed to write a book together.

-Rudolph from the book’s Introduction, pg 18

Christianity, in general, is the ultimate in inclusionist movements. Any one from any place can turn to Messiah and be accepted. No prior experience required. As it turns out in reading Rudolph, his vision of Messianic Judaism is one that isn’t whole without including Gentile Christians. Our differences complement each other, as do the differences between a man and a woman in a marriage. We aren’t complete without each other.

I look forward to continuing my reading of Rudolph’s and Willitts’ book. So far, it is inspiring hope.

10 thoughts on “Introduction to Messianic Judaism: An Exercise in Wholeness”