For every complex question, as H.L. Mencken once put, there is usually an answer that is “clear, simple and wrong.” His observation rings true when it comes to a question I get at least once a week. What do Jews believe about Jesus?

Jews as a group rarely agree on matters of Jewish belief. How could we agree on the essence of another? Yet, we ignore the question at our own peril.

An MJ friend wrote me describing the resistance he has been encountering from other Messianic Jews about Torah. He gets it. Mount Sinai is an eternal covenant between God and Jewish people.

And meanwhile, the Bible from cover to cover is about God’s-plan-through-Israel-to-the-world and yet the “through Israel” part is forgotten by most. Deuteronomy 4:6 is in the Bible. Verify this for yourself.

“What is the Torah?”

I’ve been blogging and blogging and reading and reading trying to come up with an answer that will work between my Pastor and me during our usual Wednesday night discussions. Pastor Randy is away for several weeks in association with his doctorate studies, but I sent him a link to Derek Leman’s blog post Do Messianic Jews Really Need to Keep Torah, since it addresses the heart of our conversations. Pastor has no spare time for a long blog post, but he did send me a brief email saying that he believes the Abrahamic covenant is eternal, but the Mosaic covenant is not.

I suppose I should have expected that response, and it surprisingly hit me in a tender spot. So when Derek wrote Why Don’t Christians Believe Deuteronomy 4:6, it did absolutely nothing to improve my disposition.

Really, is there any hope for communication across the aisle, so to speak, or are we doomed to endless discussion and endless disagreements with no middle ground between any of us?

Do I really want to live a life of faith like this, at least communal faith?

But Rabbi Moffic said that “Jews as a group rarely agree on matters of Jewish belief.” Ever since Sinai, the Jewish people have been chosen and called out to be different from all of the other peoples and nations of the Earth, but how do they stand all of the internal dissonance? My guess is that, at some core level, no matter what other disputes and disagreements one Jew has with another, at the end of the day, a Jew is always a Jew.

OK, I know there are problems with that statement and there are all kinds of disputes between different sectors of Judaism, but when “they” come for you because you’re a Jew, those disputes vanish like a snow cone in a blast furnace. Beyond a certain point, we can even grasp hope based on a Jewish Cantor welcoming even Messianic Jews on Tisha B’Av.

But that doesn’t translate very well if at all to differing groups of Christians.

John the Baptist described himself as “the voice of one crying in the wilderness” (John 1:23), and that worked pretty well for him up until his beheading, but I’m not sure how well it’s working for me.

OK, I get that. The constant “head-banging” is supposed to sharpen us, but it also can be painful, and frankly, I’m getting a headache.

I know, “if you can’t stand the heat…” Maybe I should get out of the kitchen.

But that’s where the food is.

For everyone who partakes only of milk is not accustomed to the word of righteousness, for he is an infant. But solid food is for the mature, who because of practice have their senses trained to discern good and evil.

At the end of the day, a Jew is a Jew and like it or not, all Jewish people have been bonded together since Sinai and probably before that. Does that work for Christians, though? Are we bound together so that, when adversity strikes, we’ll join with each other based on our common identity as disciples of Christ?

I’d like to think so, but I don’t know. Jews are bound not just based on belief and theology, but by 3500 years of common experience and even down to the level of DNA. Although Jews don’t think of themselves in terms of being “tribal” anymore, it’s still there beneath the surface. Tribes and clans and families are bonded beyond any unbonding, and God drew all Jewish people to Him under the chuppah of cloud and fire at Sinai and sealed the covenant with Torah.

The Birthright program exists to encourage young Jewish people who have little or no attachment to the Land and to the Torah to experience Israel. I hear there’s something about standing on the ground and breathing the air in Israel that has an effect on Jewish people (and perhaps a few Christians as well). I can’t say from experience, but for the sake of my Jewish children, I hope so.

I can only say that for Christians, a common faith in Jesus is the lynchpin that holds us together, at least in theory. But while it is presupposed that Jews will argue with Jews as an expected behavior, how am I as a Christian supposed to explain to another Christian that being Jewish and the existence of the Torah are inexorably linked and cannot be unlinked. Even an atheist Jew will one day confront the meaning of being Jewish beyond the mere ethnic and genetic identity. 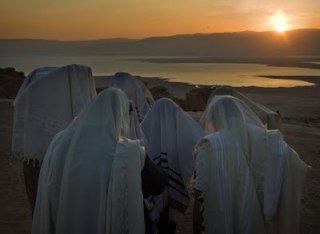 I recently wrote about Jews encountering themselves through the mitzvot and some Rabbis hope that encouraging a Jewish person to experience even a single mitzvah will make a difference. At the time, I applied that hope to Christians as well, but we must face the facts that Christians don’t think of themselves in the same way as Jewish think of themselves.

No wonder that we can’t get Christians to see Jews as they want to be seen.

There are days when I just want to scream to the Church, “Just let Jews be Jews! We don’t have to agree with them! They don’t need our permission!” But I suppose that wouldn’t go over very well.

I have what I think of as a unique relationship with my Pastor in that we can regularly meet every week, disagree on fundamental issues, and still be friends. Pastor lived in Israel for fifteen years and is intimately acquainted with Jewish life in Israel, so on that basis, he knows what it is like to live among lots of Jewish people. And yet, every week when we meet, I still feel like I’m facing some sort of battle for the rights of Jewish people to define their own identity as Jewish based on the Torah, especially Jews who are disciples of Messiah.

I keep thinking of the venerable 19th century Rabbi Isaac Lichtenstein who became a devotee of Yeshua past the age of sixty and yet remained wholly Jewish in his practice, observance, identity, and discipleship. His life as a devout Jew and a Messianic disciple seems so open and clear. Reading The Everlasting Jew showed me how his life made so much sense the way he lived it.

I don’t see a dissonance between what R. Lichtenstein believed and how he lived and the Biblical life of Jesus, Peter, and Paul. I just wish everyone could see what I see, not because I’m so smart, but because I believe I’m seeing what God wants all Christians to see when we look at Messianic Jews.

Why is communicating that vision so hard?

31 thoughts on “What Christians See When Looking At Messianic Jews”