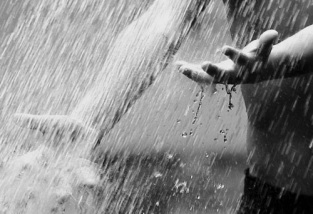 Give ear, O heavens, let me speak; Let the earth hear the words I utter! May my discourse come down as the rain, my speech distill as the dew, like showers on young growth, like droplets on the grass.

God’s word is like rain in a dry land. It brings life. It makes things grow. There is much we can do of our own accord: we can plough the earth and plant the seeds. But in the end our success depends on something beyond our control. If no rain falls, there will be no harvest, whatever preparations we make. So it is with Israel. It must never be tempted into the hubris of saying: “My power and the strength of my hands have produced this wealth for me” (Deut. 8: 17).

There is only one Torah, yet it has multiple effects. It gives rise to different kinds of teaching, different sorts of virtue. Torah is sometimes seen by its critics as overly prescriptive, as if it sought to make everyone the same. The midrash argues otherwise. The Torah is compared to rain precisely to emphasize that its most important effect is to make each of us grow into what we could become. We are not all the same, nor does Torah seek uniformity. As a famous Mishnah puts it:

When a human being makes many coins from the same mint, they are all the same. God makes everyone in the same image – His image – yet none is the same as another. (Mishnah Sanhedrin 4:5)

Torah is a lot of things including its teachings being like rain and dew. It’s nourishing and helps living things grow. Without it, all life dies. I suppose it’s even possible to immerse in Torah and drown.

But although it is highly variable in purpose and use, it is for everyone.

Question: Why do the Jewish people needs a covenant/Brit with G-d. Why do we have to be commanded to follow his Mitzvos? Why is the commitment necessary? Please let me know if you have any suggestions on further readings as well.

Answer: The Talmud asks your question, in a way. First, note that the Torah gives commandments to Gentiles as well, so evidently it is the Torah view that all humans need these. In fact, Adam, the 1st man, was commanded.

Second, you have to define Mitzvah. What is a Mitzvah? You say it’s a “commandment.” I say that’s a fine 2nd-grade answer. An adult definition is “an opportunity to create a spiritual connection to God.”

So you ask, why do I need specific Mitzvot rather than just to create my own? Answers the Talmud: it gives you a greater connection when you are told what to do than if you create your own. This is due to human nature. It is human nature to resist instructions. If I have to overcome that resistance, the spiritual connection is greater.

No, I’m not saying that the Torah is applied to Gentiles in the exact same way as to Jewish people. Chief Rabbi Lord Sacks says we’re not all the same, and Rabbi Seinfeld says that we all need Torah to create a spiritual connection to God, but the Torah isn’t the same for everyone.

Rabbi Seinfeld admits that even we Gentiles need Torah. But in what way? Chief Rabbi Lord Sacks replies:

On this, Rashi comments:

Why is this expression (“God of the spirits of all mankind”) used? [Moses] said to him: Lord of the universe, You know each person’s character, and that no two people are alike. Therefore, appoint a leader for them who will bear with each person according to his disposition.

One of the fundamental requirements of a leader in Judaism is that he or she is able to respect the differences between human beings.

And the prophet Joel says:

The Apostle Peter quotes the Prophet in Acts 2:17 to describe the giving of the Spirit to the twelve who had been waiting. We also know that “all mankind” wasn’t limited to Jewish apostles and disciples:

While Peter was still speaking these words, the Holy Spirit fell upon all those who were listening to the message. All the circumcised believers who came with Peter were amazed, because the gift of the Holy Spirit had been poured out on the Gentiles also.

But while Jews and Gentiles can equally receive the Holy Spirit of God, can we apply Rashi’s comments and the Torah in the same way? Chief Rabbi Lord Sacks states:

According to Maharsha, there are 600,000 interpretations of Torah. Each individual is theoretically capable of a unique insight into its meaning. The French philosopher Emmanuel Levinas commented:

The Revelation has a particular way of producing meaning, which lies in its calling upon the unique within me. It is as if a multiplicity of persons … were the condition for the plenitude of “absolute truth”, as if each person, by virtue of his own uniqueness, were able to guarantee the revelation of one unique aspect of the truth, so that some of its facets would never have been revealed if certain people had been absent from mankind.

Judaism, in short, emphasizes the other side of the maxim E pluribus unum (“Out of the many, one”). It says: “Out of the One, many”.

The miracle of creation is that unity in Heaven produces diversity on earth. Torah is the rain that feeds this diversity, allowing each of us to become what only we can be.

Of course, that explanation may not be entirely satisfying to non-Jewish people in traditional Christianity, Hebrew Roots, Messianic Judaism, and all their variant streams. There’s a tendency, especially here in America, to strive to make everyone exactly the same. Equality means homogenization and cookie cutter duplication, with no variations allowed. It’s hard to contrast this with a society that says it also values diversity.

The Master said that the rain falls on the just and the unjust alike (Matthew 5:45), but he didn’t say that the rain always means the same thing to each person upon whom it falls. We are all grafted into the same root and fed by the same sap, but that doesn’t mean the branches from the wild tree (Gentiles) transmutate into branches identical to the civilized tree (Jews). Children from different nations, races, and ethnicities could be fed by the milk of a single mother, but that doesn’t mean all of the children would become identical in national, racial, and ethnic origin to the mother.

What it does mean is that God all loves us with impartiality, even the unjust, for he feeds and waters them as well. If God did not love them, then there would be no hope for any of us, as no person ever came to God clean and unsullied by sin. In this season of repentance and renewal, we should not complain because we are different, but rejoice because we are all equally loved by our Father Who is in Heaven.

When Messiah returns, he will be able to treat us all with love and to respect us as Jews and Gentiles, and as human beings all created in God’s image, and yet with no two of those “images” being exactly alike.

One of the fundamental requirements of a leader in Judaism is that he or she is able to respect the differences between human beings.

Wishing you a good and sweet new year.