After some days Paul said to Barnabas, “Let us return and visit the brethren in every city in which we proclaimed the word of the Lord, and see how they are.” Barnabas wanted to take John, called Mark, along with them also. But Paul kept insisting that they should not take him along who had deserted them in Pamphylia and had not gone with them to the work. And there occurred such a sharp disagreement that they separated from one another, and Barnabas took Mark with him and sailed away to Cyprus. But Paul chose Silas and left, being committed by the brethren to the grace of the Lord. And he was traveling through Syria and Cilicia, strengthening the churches.

I’m debating about whether or not to make “Transmissions from Church” a series, basically my “voice” about my experiences in Church worship and Bible study. I’ll make up my mind by the by, I suppose.

The above-quoted scripture was the basis for Pastor’s sermon last Sunday and the teaching in Sunday school. It’s always very interesting to me to see how Pastor can take a few verses that don’t seem to communicate a great deal theologically, and speak on them for ninety minutes.

But the sermon isn’t the first thing that happened in church last Sunday. The first thing that happened “officially” at the start of the announcements was an update about a missionary family that’s been serving in Papua New Guinea (PNG). What got my attention the most was the interaction the missionary had with one of the local Pastors, a man with only an elementary school education who on one Sunday, baptized twenty-two people. This Pastor lived and served in the mountains, a two-day walk from the nearest town. More than anything, he asked and even begged for more missionaries and more Pastors to speak the word of Christ to those people in the remotest parts of PNG who had never heard of Jesus.

I believe the Pastor’s name was David Livingston Tila. He was a man of great Spirit but his valiant heart was weak and he died not to long ago at too young an age.

I sometimes live in a very sheltered world in terms of my faith, and especially in terms of my theology and doctrine. I have a very narrow focus as far as what the Bible is trying to say, the identity of the Messiah, and how what God is trying to pass along to us may best be comprehended when viewed through a Jewish lens.

I was reminded recently that one of the primary functions of a disciple is to memorize the teachings of his Master and then pass those teachings along to the next generation, usually when that disciple has started to make his own disciples.

That’s also what missionaries do. They pass along the teachings of Jesus Christ to people who have never heard of Jesus before.

Within my own small set of connections across the blogosphere and occasionally in person, we debate about how movements such as Hebrew Roots and Messianic Judaism see things like the “message of salvation,” the identity of the Jewish Messiah, and what life will be like when the Son of David once again rules in Jerusalem.

If you’re involved in Hebrew Roots or Messianic Judaism, that should make you feel kind of small.

Well, maybe not. I know that First Fruits of Zion (FFOZ) manages to get around, not only in the United States, but in the Middle East and South Africa (and probably other places I don’t know about). The most recent eye-opening announcement from FFOZ is that they will soon be going to Hong Kong. Bet you didn’t see that one coming. I know I didn’t.

My opinion is that stuff like this happens when Messianic Judaism approaches the Christian Church with an olive branch and an offer to partner on the mutual imperative (since we all serve one Messiah, and One God) to tell the world of the Messiah and make disciples of all nations.

But we have a long way to go.

Going back to last Sunday’s sermon, Pastor said that “the Church” in Antioch commended Paul and Sirus on their trip back to the churches in Galatia (no, there was no such thing as a “church” yet as we think of it in modern times). In Sunday school, it was noted that at one point Paul referred to himself as a “Father” to some of his disciples, and also that Peter called Mark his “son.” While everyone felt this expressed the love that Paul and Peter had for the “churches” and “Christians” they made, I reflected (silently) that it is common for a Rabbi to be considered the father of his disciples.

A few weeks back, I wrote a blog post called The Christianization of Acts 15. I haven’t been to church again since I wrote that blog post until last Sunday. I had a legitimate reason on one Sunday, but on the other, I was just tired and I needed a break. I was even a little nervous about going back, but it all worked out. I even saw someone I hadn’t visited with in a long time. He was only there for that Sunday and I would have missed him if I hadn’t decided to go to services.

And I was reminded that the Church is still in charge of the Gospel of Jesus Christ, no matter what the Hebrew Roots and Messianic Jewish movements may think about that. As I write this, it is quite possible that Pastor David’s plea for Pastors and missionaries to be sent to the remote areas of PNG is being fulfilled by the Holy Spirit, and that men and women living in these areas, who have little education and who live very hard lives, are being taught about Jesus for the very first time. You and I can walk down any street in America and we can ask anyone we meet if they know who Jesus was and what a Christian is. Even if they are atheists, they’ll be able to give us an answer.

In PNG and many places on Earth like it, Pastors and missionaries are talking to people who have no idea who Jesus is but are more than eager to learn.

Pastor David baptized twenty-two people on a single Sunday. They worship in a church with no walls and they use wooden boards to sit on. Their biggest need until recently, was building materials so they could make a roof to keep out the rain.

In Acts 15:36-41, Paul and Barnabas, men who were friends and who had served God together for years, came to sharp disagreement, a violent argument, over whether or not Barnabas’s nephew John Mark should accompany them. The argument had an explosive ending when Paul chose Silas to go with him in his return trip to Galatia and Barnabas left with Mark for Cyprus.

Who was right and who was wrong? The “Church” in Antioch commended Paul and Silas, not Barnabas and Mark. Paul was always the point man for the mission to take the Gospel to the Gentiles, the function of any good disciple. Barnabas was in the background, supporting and encouraging Paul in his trials. Here, he supported Mark and the result was a splitting with Paul.

But something about that situation must have worked out. We learn later that Paul amended his opinion of Mark and considered him a valuable co-worker, helpful, and a comfort (Col. 4:10-11, 2 Tim 4:11, Philemon 1:24). Mark became Peter’s disciple and Peter (1 Peter 5:13) called Mark his “son.” And as Peter’s disciple, it was Mark’s responsibility to memorize everything Peter said about the teachings of Jesus (since Peter had been Messiah’s disciple), and he wrote everything down, which is where we get the Gospel of Mark. 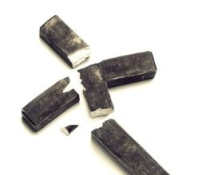 How too is the body of Messiah currently carved up like a turkey on Thanksgiving, dark meat and light, giblets and gravy, drumsticks and wings, so many parts. On the one hand, we’re arguing and disagreeing on what we think the Bible is telling us and emphasizing why we’re right and the other folks are wrong (regardless of who “we” are and who the “other folks” are). On the other hand, we can see from Acts 15:36-41 and from the other scriptures I mined from my “church experience” last Sunday, that things didn’t turn out so bad for Mark down the road. Sure, he was accused of deserting Paul (in Acts 13:13) but for reasons we do not know, was able to restore himself in the community of “the Way” and specifically with Paul.

In the end for us, I don’t doubt that those problems we now have with each other, that we view as insurmountable barriers, will be smoothed down (or violently torn down) in Messiah’s reign, and every knee will bow to the King.

Some of those knees currently belong to people who live in the most remote areas of Papua New Guinea, who were brought to Christ as disciples by the now deceased Pastor David Livingston Tila, who are hungry to hear any Word of the Lord from whoever is willing to come as missionary or Pastor. The Master said, “the harvest is plentiful, but the workers are few.” (Matthew 9:37). That’s because too many workers are still arguing with each other over theologies and doctrines instead of actually working.

5 thoughts on “Transmissions from Church: The Missionaries”