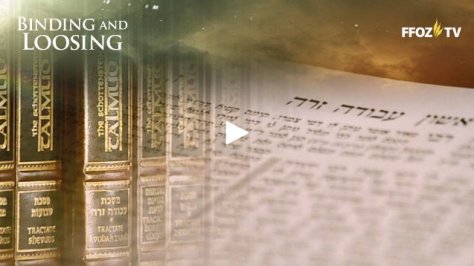 Episode 17: Over the years numerous explanations have been given for what Jesus meant when he talked about binding and loosing, not the least of which is that it refers to restraining demons. In episode seventeen viewers will discover that the context of Jesus’ words is that of a legal nature. When the Jewish background to the terms “bind” and “loose” is examined, Christians can get a clearer understanding of what Messiah was teaching about. Binding and loosing in actuality refers to legal rulings in regards to the Scriptures and not spiritual warfare.

-from the Introduction to FFOZ TV: The Promise of What is to Come
Episode 17: Binding and Loosing

The Lesson: The Mystery of Binding and Loosing

I haven’t given much thought to the traditional Christian understanding of the concepts of “binding” and “loosing” since I only looked at them from a Hebrew Roots/Messianic Jewish driven perspective, however, First Fruits of Zion author and teacher Toby Janicki started with the Christian viewpoint of these ideas. He described a prayer meeting he attended when he was young where the following passage from scripture was read:

Toby told his audience that immediately after this verse was read, the people began to pray, “We bind you Satan in the name of Jesus,” suggesting that Matthew 18:18 was a description of Jesus giving the disciples the power to “bind Satan.” I immediately thought of my recent commentary on John MacArthur as well as my conversation with my Pastor on the matter, and how both seem to take the point of view that people can’t really summon the power of the Holy Spirit to make any effective spiritual or physical changes in our world. 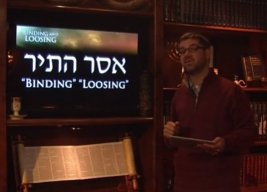 Toby brought up an interesting and useful point to this issue. If Jesus gave his disciples (i.e. “us”) the power to “bind Satan,” why would he give us the power to “loose” him as well? It doesn’t make sense.

Invoking “context is king,” Toby reads from the larger selection of scripture containing the key verse:

“If your brother sins against you, go and tell him his fault, between you and him alone. If he listens to you, you have gained your brother. But if he does not listen, take one or two others along with you, that every charge may be established by the evidence of two or three witnesses. If he refuses to listen to them, tell it to the church. And if he refuses to listen even to the church, let him be to you as a Gentile and a tax collector. Truly, I say to you, whatever you bind on earth shall be bound in heaven, and whatever you loose on earth shall be loosed in heaven. Again I say to you, if two of you agree on earth about anything they ask, it will be done for them by my Father in heaven. For where two or three are gathered in my name, there am I among them.”

I’ve accused Christian Bible studies before about “cherry picking” specific verses in the Bible to create a particular picture or doctrine and Toby showed us how true this can be. He deconstructed this passage to show us what really seems to be happening here.

It’s no coincidence that it requires two or three witnesses to perform this function:

A single witness shall not stand up against any man for any iniquity or for any error, regarding any sin that he may commit; according to two witnesses or according to three witnesses shall the matter be confirmed.

The sequence of events described in Matthew 18:15-20 references a legal proceeding. If an infraction, error, or sin is committed, a set of legal steps is set in motion. First the individual who was offended may attempt to settle it privately, but if that isn’t effective, then two or three witnesses are brought in. Finally, if the matter cannot be settled, the entire congregation makes a decision to set the sinner out.

The two or three witnesses, according to Toby, are actually the authorities within the community who are acting as judges. Of three witnesses, at least two or all three must agree for any legal decision to be binding. This is how a Beit Din of Jewish Rabbinic court operates today. Jesus was giving his disciples the authority to make binding legal decisions for the Messianic community of “the Way.” This is also mirrored today in more than one Christian church system where the board of deacons, elders, or directors make authoritative decisions for the entire church.

Here we have the first clue:

Clue 1: Jesus’s words about “binding” and “loosing” occur in a legal context. 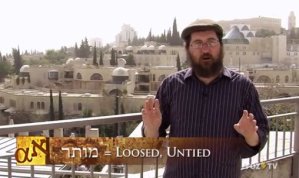 I was (again) struck by the fact that the church can (quite often) misunderstand the Bible in general and the New Testament writings in particular by ignoring the Jewish cultural, historical, and legal context of scripture. Even fundamentalist and literalist Christians will miss important and even critical details by failing to take the “Jewishness” of the Jewish scriptures (i.e. the Bible) into account.

For instance, an Israeli “No smoking” sign in Hebrew can be literally translated as “Smoking is bound” or “prohibited.” Aaron also tells us that in religious Judaism, a particular Rabbi can prohibit or “bind” a particular activity as well as “loose” or permit an activity. A Jewish person unfamiliar with the rulings on a specific topic can consult a Rabbinic sage and receive a judgment on whether it is bound or loosed (prohibited or permitted) but it is bound (prohibited) to go from Rabbi to Rabbi in search of a favorable legal opinion.

While Toby used the English Standard Version of the Bible (purposely) from which to quote scriptures, Aaron backs up his point by referencing the Delitzsch Hebrew Gospels to read from Matthew 16:19 (a scripture we looked at just last week):

Back with Toby in the studio, he reads from the DHE Gospels, as Aaron did, but quotes Matthew 18:18 again:

If a matter is legally decided by two or three judges or authorities within the congregation on earth, then it will be supported by the Heavenly authority as well (which makes me wonder how all that works today with so many different and contradictory Christian and Jewish groups, each issuing authoritative legal rulings for their congregations…which one(s) does/do Heaven support?).

We now have the second clue for this program:

Clue 2: “Bind” and “Loose” are figures of speech in the Hebrew.

I probably would have said that “Bind” and “Loose” are legal terms in ancient and modern religious Judaism, but you get the idea.

I was wondering why Toby needed a third clue since it seemed to me the point was well made, but he continued by quoting from the Mishnah an example of a legal ruling about fruit grown in Israel, which needs to be tithed, or grown outside Israel, which does not need to be tithed. I’ll skip the details because you will want to watch this episode without knowing everything it teaches ahead of time.

Toby also referenced Acts 15 where the Messianic community exercised their authority to bind or loose in relation to the question of whether or not Gentiles could be allowed into the community without converting to Judaism. Should Gentiles by bound or prohibited from formal entry until they legally converted, or should they be loosed or permitted to join without such a conversion?

An examination of the Acts 15 process (and remember, Luke only recorded a small summary of what was assuredly a much longer and involved proceeding) illustrates the matter of deliberations by those who possessed the authority given them by the Master, and the ultimate decision was to loose the Gentiles from conversion and full Torah obligation, although they were bound to what we refer to as the “four essentials” in order to enter (as an interesting exercise, you can try reading Acts 15 and see if you can determine the actual authorities involved [two or more judges] in making the legal ruling about the Gentiles).

Toby didn’t put it into these terms, but the Council of Apostles and Elders in Acts 15 established halachah or a legal ruling about the procedure of Gentile admittance into “the Way.”

Clue 3: Examples from Rabbinic literature and the New Testament support the two previous clues and their conclusion.

Toby further references Isaiah 11:3-4 to establish that Messiah will also “bind” and “loose” during his reign as King and Judge, as well as Isaiah 2:3-4 to make a similar illustration.

At the end of the episode, Toby made a point of trying to “smooth things over” for whoever in his traditional Christian audience might be disappointed that they didn’t really have the power to “bind Satan” based on Matthew 18:18. He reminded everyone that elsewhere in scripture, Jesus gave the disciples the power to cast out demons, and in Revelation 20:1-2, Satan will be literally bound. I again thought of MacArthur and my Pastor, both of whom probably never believed that Christians have had the power to bind or cast out demons after the close of Biblical canon. 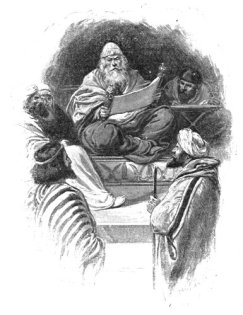 I was again taken by the fact that without an understanding of the first century Jewish Rabbinic, legal, and religious context and comprehension of the words of Jesus, it is quite possible and likely that the Church misunderstands large portions of the Biblical text. This supports my ongoing discussion with my Pastor that we grossly misunderstand Paul in those sections of scripture where he seems to denigrate the Torah and call for its practice to be abolished or “put on hold” by Jewish and Gentile disciples (not that the Gentile disciples were ever “bound” to Torah in the manner the Jewish people were).

Without the Mishnah as well as a historical understanding of how Jesus’s immediate Jewish audience and the Jewish readers of Matthew’s gospel would have comprehended these words, we will fail to learn what Jesus (or any of his apostles or disciples) are trying to teach us today. We will anachronistically read the text and make it say what translates from the Greek to the English to support erroneous doctrine. We’ve seen over the majority of the Church’s supersessionistic history how making such errors has led to Christianity as a whole committing heinous atrocities, all in the “name of Christ.”

I also saw a minor but interesting point in Isaiah 2:3:

Many peoples will go and say, “Come, let us go up to the Mountain of Hashem, to the Temple of the God of Jacob, and He will teach us of His ways and we will walk in His paths. (emph. mine)

Since the word “halachah” refers to a way of walking, this also seems to link up to learning the legally binding methods of behaving in worship and devotion to the God of Jacob. In Messianic days, we, the “many peoples” from the nations, will go up to the “Mountain of Hashem,” the Holy Temple in Jerusalem, and learn the Torah of God from Messiah.

I’ve mentioned before that I believe the Acts 15 halachic decision binds Gentiles differently to the Torah than it does Jews, but it will be interesting to see how or if any of that changes once Messiah is ruling from the Throne of David in Jerusalem. I can’t wait to find out.