In Him, you also, after listening to the message of truth, the gospel of your salvation—having also believed, you were sealed in Him with the Holy Spirit of promise, who is given as a pledge of our inheritance, with a view to the redemption of God’s own possession, to the praise of His glory.

As I write this, it is Sunday afternoon. Pastor Dave gave a sermon on Christian fellowship based on 1 John 1 and 2 (Pastor Randy had been out-of-town all week at a conference and wasn’t able to prepare a sermon for today). Pastor Dave doesn’t give sermons very often but I think he did a really good job at this one. I found that he was touching on many Jewish concepts, probably without realizing it. He spoke of walking in darkness or light 1 John 1:6-7 which I associated with halachah or the way to properly “walk” in lived obedience to God. He also talked about how God as light doesn’t mean like a light bulb, but as something that reveals what was once hidden, which brought me back to D. Thomas Lancaster’s commentary on Purim, which I reviewed yesterday.

–Pirkei Avot (Ethics of Our Fathers) 3:3

That point really spoke to me because I don’t have a lot of what I consider true fellowship in church…and it’s probably my fault.

Everyone is friendly and approachable, but I know if I let myself off my chain and really start talking about what I think and believe relative to the Bible, a lot of those people won’t want fellowship with me, or they will think I’m deluded or a heretic or something that would make fellowship impossible. He even said the very words I sometimes think:

“I don’t have any real friends at church.”

That’s not exactly true. I do have one, Pastor Randy. I’m friendly with many others, but outside of Sunday services, for the most part, we never see each other. If I had left church after the sermon, I probably would have been depressed.

But I went to Sunday school where, for this week, we departed from studying Acts and focused on Ephesians 1. I recently learned that if I have any serious questions about the lesson, mentioning them to the teacher before class begins is really helpful. He has more time to respond and I don’t think he feels so much “under the gun” since it’s just him and me.

I was having a tough time with his notes trying to figure out what his point was. It wasn’t until he started class that I realized it had a lot to do with what I’m learning from D. Thomas Lancaster’s sermon series Holy Epistle to the Hebrews and especially a concept I’m going to explore in tomorrow’s review. How Jesus could have all authority over literally everything granted to him at the ascension when he sat down at the right hand of the Father, and yet we barely see a glimmer of that reality in the day-to-day world around us.

His lesson worked over various bits and verses of scripture, but I was taking the entire chapter and to some degree the entire letter as a single unit, trying to summarize in my head why Paul even wrote the epistle and what his overarching message might be to Ephesus.

How can we have all spiritual blessings now and have authority to rule with Jesus and at the same time be mere mortal creatures struggling just to survive and discover some sort of meaning for our existence here and now? 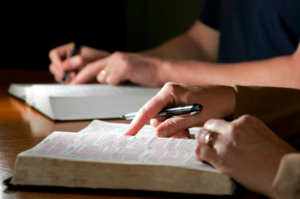 And then, when one of the people in class asked me a question in response to something I’d said, the answer hit me, but visually. I quickly asked permission to use the whiteboard, hopped up, and drawing a few pictures, gave a sixty second lesson on God’s perspective vs. ours and how I saw Ephesians 1 being some sort of bridge between the two.

I think I made the teacher nervous for a moment because he asked how long I was going to take. I told him “less than a minute,” which calmed him down, and afterward, he jokingly said that he might have to put me to work doing some teaching.

I know he was kidding and I also know that Pastor Randy would never sanction me to do any teaching in the church, since he knows what we agree and especially what we disagree on, but it felt good to “teach” again, even if it was just for a few seconds. I also felt that momentarily, I was part of the flow of transaction in the class. After class ended, I stopped to talk with the teacher and another fellow for about fifteen minutes, including sharing just a little about how “Jewish” some of the concepts Pastor Dave presented in his sermon. Every once in a while, I get the opportunity to drop a little pebble in the pond with the hope that the ripples it makes will be productive.

As I was leaving, I was able to chat with Pastor Randy for a bit, mainly over further suggestions I have for the church’s website (which I built to replace their previous and archaic web presence). He had to rush off to a Deacon’s meeting, but as I left church today, I felt a little lighter, a little brighter than on other such occasions.

I have to admit that I’ve been afraid of fellowship at the church, of becoming really involved, because of what I thought the impact would be on me and particularly how my wife would see it, not that she’d complain. Naturally, I have no problem at all with her involvement with our local Jewish community and it’s right for her, as a Jew, to be involved with other Jews. But letting the door swing both ways, I worry that she’ll be put off by being Jewish and yet having not only a husband who’s a Goy, but a Christian…one of those.

If I invest in fellowship in the church, what does it do to my wife’s feelings? We live in a fairly small community. Word gets around. How many of her Jewish friends already know I go to a church and what do they think? Not that I’m overly concerned about what people think, but I am concerned about how who I am affects her relationship with other Jewish people, especially if that affect is “damaging” in some way.

But if I don’t invest in fellowship in the church, then what am I doing at church? How will I be able to make a significant and positive contribution if I don’t develop relationships and interactions that go beyond merely attending services and Sunday school? Pastor Dave called fellowship vital not optional.

He also asked a funny question that has a serious answer, which is at the heart of my fears. Apparently Pastor Dave is a naturally friendly guy and he can’t imagine not getting along with someone or someone not getting along with him. He asked why we sometimes fail to allow ourselves to be vulnerable in our relationships at church. The following quote, I have no idea where it came from originally, popped into my head:

The church is the only army that shoots its own wounded.

In spite of Stephen McAlpine’s rebuttal, there are plenty of people who can say they’ve been “burned” by church. Given my own theological bent, I can expect to be rejected if I dropped too much information to too many people about my understanding of the Bible vs. what is typically taught by Evangelicals.

But there’s another answer I could give to Pastor Dave, and it’s another cliché of a sort, but I think it’s a useful one. Sometimes atheists will say that “religion is just a crutch” to which the cliché response is “but everyone is limping, or beaten, or bleeding.”

But it’s not religion that’s a crutch in the functional sense, but fellowship. One of the functions of fellowship, of friendship, of family, is when you’ve been knocked to the ground, and you’re having trouble getting back up, someone is there to help you. Fellowship in Christ is walking the path the Master set before us when he said this:

So fellowship in Christ not only helps us support one another when we are “limping,” but it is a direct public witness that we are Christians obeying the command of our Master by being loving.

It’s risky. Any participation in a community of people is risky. But Christian fellowship is supposed to be worth a few risks and may be the only way, or one of the only ways to encounter God as part of the body of Messiah.

Joseph was a stranger in a strange land, even as he held royal power and authority in Egypt. Moses was raised in Egypt and was a stranger in Midian, where he found a wife and raised two sons. The Torah admonishes the Israelites in how they treat strangers because they too were once strangers and aliens in Egypt.

In many ways, I’m also a stranger in a strange land, a Christian who doesn’t fit very well into a Christian church, someone who finds Adon Olam in a siddur more familiar than anything in a hymnal.

But it’s my fault. If I am to accept the challenge of fellowship, then I have to take risks, well, more risks than I’ve already taken. I just don’t know where the path will lead, the price not only I, but my family will have to pay, and how to do my best to not hurt anyone and to avoid the obvious trapdoors and pitfalls involved in “mixing” theologies, relationships, and identities.

What I learned in church today.

12 thoughts on “What I Learned in Church Today: Fellowship”