Is Christianity a Judaism? I think most Christians and most Jews would say “no,” but last Sunday morning in church, Pastor Randy said it was. In fact, it was the second Sunday he’s said such a thing.

Christianity is a Judaism?

I was kind of surprised that he said that. He also said that when Jesus returns, it will be as a Jewish King, the Messiah and he will still be Jewish.

You might be thinking “oh duh, of course he’ll be Jewish,” but there are a lot of Christians out there who believe his being Jewish died on the cross with him and that Jesus was resurrected as someone more “generic” in terms of ethnicity.

The last few times when Pastor has spoken with me at church, practically the first words out of his mouth as we’re shaking hands is, “I’ve been reading your blog.” He hasn’t said much else to me lately, so I’ve tended to take that as a message meaning he’s not really happy about what I’ve been writing. But now I wonder.

I’ve certainly been hammering away at the Jewishness of the ekklesia of the Messiah and how the Christian Church, as it exists today, won’t be what the ekklesia will be like in Messianic days.

As I was quickly taking notes on the sermon (Acts 25:23-26:32), I continued to reflect on the implications of Pastor’s words. Although I have no problem with any of the statements he made, I wondered how the rest of the congregation was taking it. No one mentioned it in Sunday school, although we were studying Ephesians 4 rather than Pastor’s message, so there wasn’t a natural opportunity to bring up the subject.

In speaking on Acts 26:4-18, Pastor referred to it as “A Conversion Story” but oddly enough, he defined “conversion” as making a “u-turn,” turning away from darkness and turning to light, to God.

That sounds more like teshuvah than conversion and in any event, as Dr. Larry Hurtado mentioned in a comment to me on his blog:

In any case, Paul didn’t undergo a “conversion” to “Christianity.” He refers to his experience as a prophet-like “calling” (e.g., Gal. 1:13-15), and there was no “Christianity” (as a separate religion) to which he could “convert” as a Jew. We could describe the former “pagans” (gentiles) that formed his churches as “converting” from the worship of their various ancestral deities to the God of the Bible/Israel. 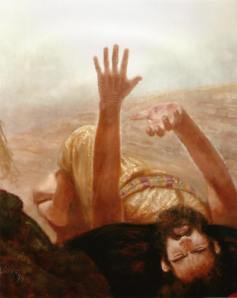 So Dr. Hurtado would call it “A Prophet-Like Calling Story” while using Pastor’s own definition, I could call the Acts 9 event “A Teshuvah Story”.

No, Paul wasn’t repenting of being Jewish or of practicing Judaism. Far from it. However, we could say that he had to make teshuvah relative to his disbelief in Yeshua as the Messiah and opposing God’s plan of using the ekklesia of “the Way” to bring Jews and Gentiles to Hashem and inaugurate the New Covenant in our world.

“So then, all Jews know my manner of life from my youth up, which from the beginning was spent among my own nation and at Jerusalem; since they have known about me for a long time, if they are willing to testify, that I lived as a Pharisee according to the strictest sect of our religion. And now I am standing trial for the hope of the promise made by God to our fathers; the promise to which our twelve tribes hope to attain, as they earnestly serve God night and day. And for this hope, O King, I am being accused by Jews. Why is it considered incredible among you people if God does raise the dead?”

I’m pulling a lot of my interpretation of this section of scripture, not only from D. Thomas Lancaster’s lectures on the New Covenant, but his sermon series The Holy Epistle to the Hebrews.

Paul continues to identify himself as a Pharisee, living in the strictest sense of that stream of Judaism, and that he has the “hope of the promise made by God to” his “fathers”, the hope of the resurrection, of life from the dead. He even asks his Roman audience as well as King Agrippa why they should find it so difficult to believe that the God who created the universe could also raise the dead back to life, thus extending the promise beyond just the Jewish people and making it a hope for all human beings. 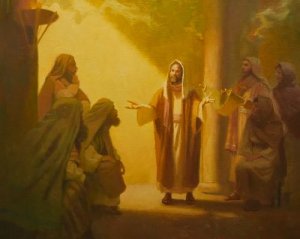 It may have seemed that Paul was the prisoner, but he appears to have made a captive audience of his jailers and accusers in delivering the message of the Good News.

I did have the opportunity to discuss part of Pastor’s sermon with one young fellow in Sunday school. After class let out, he had some questions about a part of Ephesians he’d been studying and thought for some reason I could help answer his queries.

In the course of our conversation, I realized part of the problem many late second temple period Jewish groups had with accepting Yeshua (Jesus) as the Messiah.

So when they had come together, they were asking Him, saying, “Lord, is it at this time You are restoring the kingdom to Israel?” He said to them, “It is not for you to know times or epochs which the Father has fixed by His own authority; but you will receive power when the Holy Spirit has come upon you; and you shall be My witnesses both in Jerusalem, and in all Judea and Samaria, and even to the remotest part of the earth.”

Even Yeshua’s disciples believed that the Messiah would first raise Israel as the head of all the nations, defeat her enemies, and ascend the Throne of David, and only afterward reconcile the Gentiles to God. Saying that the Messiah died, was resurrected, and ascended into Heaven to sit at the Father’s right hand and that before he returned to take the throne, the Gentiles would be brought alongside Israel in the worship of Hashem was reversing the expected order of things.

For a lot of Jews, it must have seemed pretty bogus to say that Gentiles could be brought into the ekkelsia, into a Jewish community and worship space, as equal co-participants while the Messiah was not yet physically ruling as King over Israel and over the rest of the world.

Paul knew the truth but he had a special insight. He had received two visions of the Messiah (Acts 9:3-8, Acts 22:17-22) and was caught up to the third heaven (2 Corinthians 12:2-4) and taught inexpressible words that he was not permitted to speak. For those Jews and Gentiles who believed, they did so from a profound sense of faith, since even though Paul could be persuasive, his words were not always convincing to every one who listened.

King Agrippa, do you believe the Prophets? I know that you do.” Agrippa replied to Paul, “In a short time you will persuade me to become a Christian.” And Paul said, “I would wish to God, that whether in a short or long time, not only you, but also all who hear me this day, might become such as I am, except for these chains.”

When Agrippa said “become a Christian,” the term “Christian” was not used in the same sense as we understand it today, because, as I’ve mentioned on numerous previous occasions, faith in Messiah Yeshua was not a religious stream distinct from Judaism at that point in history. Agrippa might have just as well said “make me a disciple of the Way”. And it was well-known that Agrippa was hardly devout and pious though he doubtless had some education in the traditions of his fathers (for Paul knew Agrippa believed the Prophets).

Does that bring us back to thinking of Christianity as a Judaism, or am I the one getting things reversed?

During his lifetime, Paul obviously considered faith in Yeshua as Messiah King to be the next, natural, logical extension in the development of God’s plan for Israel. Yeshua was and is the beginning of God’s starting to fulfill the New Covenant promises to Israel, but those promises include bringing the Gentiles into worship of Hashem by coming along side Israel and becoming attached to her. Messiah was the doorway for the Gentiles to enter that forward-progressing stream of God’s plan for Israel, not by making Gentiles into Jews through the proselyte rite, but allowing them (us) to remain of the nations and yet, as was prophesied, enjoying the blessings of the spirit and the hope of the resurrection into the age of peace and tranquility.

I’d like to believe that some of the things I’ve written lately have been positively received by Pastor Randy, but that’s probably arrogant presumption on my part. However, his sermon last Sunday did seem to speak to many of the themes I write about on my blog. I not only found myself in general agreement with Pastor’s sermon but found myself learning some things I hadn’t noticed before in my reading of this part of Luke’s “Acts”.

Is Christianity a Judaism? In its current form, we can say that it owes a great deal to its Hebrew or Jewish roots, but there’s a lot about that “Judaism” the Church as left by the wayside. But as Pastor said, the return of Jesus is the return of the Jewish Messiah King to the Throne of David in the City of David.

With Jewish devotees cheering and Gentile disciples alongside them crying out in joyous approval, Messiah will raise Israel up as the most exalted of all nations, rebuild the Temple, return the Jewish exiles to their Land, rule the world with a rod of iron, and bring peace to all peoples.

What will the ekklesia be then? It will be Jewish, but it should be remembered that “every knee shall bow” (Isaiah 45:23, Romans 14:11), not just of the Jews but of everyone, the whole world.

20 thoughts on “What I Learned in Church Today: Christianity is Jewish”