But if the ministry of death, in letters engraved on stones, came with glory, so that the sons of Israel could not look intently at the face of Moses because of the glory of his face, fading as it was, how will the ministry of the Spirit fail to be even more with glory?

In 2 Corinthians 3 Paul teaches a short discourse contrasting the glory of the Old Covenant and the glory of the New Covenant, employing the metaphor of the veil that concealed the light of Moses’ face. This passage is frequently understood to imply replacement theology the cancellation of the Torah, but a closer look reveals a the role of the Torah in both old and new covenants.

Before getting into today’s review, I should mention that this is pretty much the same material I reviewed from Lancaster’s lecture series What About the New Covenant. You’ll get most of my commentary from my previous review of From Glory to Glory (which you should read if you haven’t done so already), but you won’t get all of it. That’s because Lancaster changed a few things around and became more overtly “mystic” in today’s sermon. Maybe that’s because he’s talking to his home congregation vs. producing a teaching for a more generalized audience.

The new stuff I learned came packaged in the two “Prologues” to his sermon (also see Zechariah 12:10).

Then Joseph could not control himself before all those who stood by him, and he cried, “Have everyone go out from me.” So there was no man with him when Joseph made himself known to his brothers. He wept so loudly that the Egyptians heard it, and the household of Pharaoh heard of it. Then Joseph said to his brothers, “I am Joseph! Is my father still alive?” But his brothers could not answer him, for they were dismayed [terrified] at his presence.

Then Joseph said to his brothers, “Please come closer to me.” And they came closer. And he said, “I am your brother Joseph, whom you sold into Egypt. Now do not be grieved or angry with yourselves, because you sold me here, for God sent me before you to preserve life. For the famine has been in the land these two years, and there are still five years in which there will be neither plowing nor harvesting. God sent me before you to preserve for you a remnant in the earth, and to keep you alive by a great deliverance.”

It came about when Moses was coming down from Mount Sinai (and the two tablets of the testimony were in Moses’ hand as he was coming down from the mountain), that Moses did not know that the skin of his face shone because of his speaking with Him. So when Aaron and all the sons of Israel saw Moses, behold, the skin of his face shone, and they were afraid to come near him. Then Moses called to them, and Aaron and all the rulers in the congregation returned to him; and Moses spoke to them. Afterward all the sons of Israel came near, and he commanded them to do everything that the Lord had spoken to him on Mount Sinai.

Let’s take a look at what these two passages have in common. 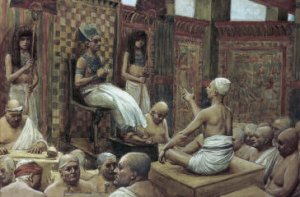 First we have Joseph, you all know about Joseph, who his brothers had sold into slavery, who was first a slave in Potiphar’s house, then a prisoner, and finally raised to the station of ruler over Egypt second only to Pharaoh, King of Egypt.

His identity was hidden from all his brothers. They never recognized him, even though they faced him repeatedly, even in Joseph’s household. Only when Joseph directly revealed himself, taking off his veil if you will, did they recognize him…and were terrified. After all the rotten things they’d done to Joseph, they suddenly knew that not only was he alive but he was virtually the most powerful man on Earth, capable of any act, good or bad, and they were totally in his power.

But Joseph was merciful. He forgave them, all of them. He told them not to be afraid. He told them to come near and when they did, they were all reconciled.

Now how about Moses. The “back story” is when Moses was up on the Mountain with God the first time, the Israelites rebelled, created the Golden Calf, and worshipped it as the “god” who had brought them out of Egypt. Moses came down with the first pair of tablets and when he realized what they were doing, smashed them. God wanted to wipe out the Israelites, but Moses interceded on their behalf, made a second set of tablets at God’s command, and renewing the covenant, took the tablets down to Israel.

What Moses hadn’t realized was that in his time with God, his face started glowing with a sort of reflection of the light of the Divine Presence. When Moses returned to the Israelites, they saw him, the tablets, and his glowing face and they were afraid and ashamed, especially so soon after the incident of the Golden Calf. But Moses forgave them, all of them. He brought with him God’s Torah and he bade his brothers to come closer. And when they did, they were all reconciled.

Now imagine this is a picture of the Second Coming of Christ (Messiah). Remember, I mentioned Zechariah 12:10.

The revelation of the identity of Messiah to the Jewish people could very easily be anticipated by the six-point list above including Yeshua (Jesus) presenting what Lancaster calls the Supernal Torah, the Heavenly Torah, unfettered by the “clothing” that was necessary to present the Earthly Torah at Sinai.

I knew of the comparison between Joseph’s revelation to his brothers and Messiah but I hadn’t factored in Moses before.

2 Corinthians 3 is the link. It makes a “lighter to heavier” comparison between the Old (Sinai) and New Covenants using Moses’ glowing face and the veil.

When Moses had finished speaking with them, he put a veil over his face. But whenever Moses went in before the Lord to speak with Him, he would take off the veil until he came out; and whenever he came out and spoke to the sons of Israel what he had been commanded, the sons of Israel would see the face of Moses, that the skin of Moses’ face shone. So Moses would replace the veil over his face until he went in to speak with Him. 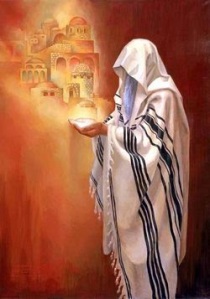 According to what Lancaster says, although the Sinai Covenant is exceedingly glorious, the New Covenant still blows it away because, mystically and metaphorically speaking, the “glow” of the New Covenant’s mediator, that is Messiah, never fades.

Lancaster believes this is the difference between mortality and immortality. Moses, like all men, was mortal, and so were all the Priests and Prophets, but one of the requirements of the job description of Heavenly High Priest, the mediator of the New Covenant, is to be immortal.

Therefore having such a hope, we use great boldness in our speech, and are not like Moses, who used to put a veil over his face so that the sons of Israel would not look intently at the end of what was fading away. But their minds were hardened; for until this very day at the reading of the old covenant the same veil remains unlifted, because it is removed in Christ. But to this day whenever Moses is read, a veil lies over their heart; but whenever a person turns to the Lord, the veil is taken away.

Lancaster compares this to a Chassidic rebuke that can only be understood via mysticism (I’m sure I’m losing some of my audience here). This is not a comparison between Judaism and Christianity, it’s a comparison between Jews who study the Torah without the “lens” of the revelation of Messiah and those who do. Those who are not yet aware of the identity of Messiah may be compared to Moses wearing a veil with the glow faded. Those who study Torah with the revelation of Messiah may be compared to Moses with his face unveiled and glowing with the reflected glory of God.

Now the Lord is the Spirit, and where the Spirit of the Lord is, there is liberty. But we all, with unveiled face, beholding as in a mirror the glory of the Lord, are being transformed into the same image from glory to glory, just as from the Lord, the Spirit.

Lancaster commented that he wished Paul would have said more about “there is liberty” at the end of verse 17. Liberty from what? From the Torah? From observing the mitzvot? That doesn’t make sense given the context of the New Covenant he’s been teaching for the past few sermons. What does make sense is freedom from condemnation. One of the purposes of the Torah under the Sinai Covenant was to identify and condemn sin. The penalty for unrepented sin was/is death. But under the New Covenant, the sins of all of Israel are forgiven and with the New Covenant written on human hearts, comes everlasting life.

I think you can get the other important points Lancaster made from my other review. Of course, to be sure, you should listen to the sermon yourself. It’s only about forty minutes long.

When He said, “A new covenant,” He has made the first obsolete. But whatever is becoming obsolete and growing old is ready to disappear. (emph. mine)

For his sermon, Lancaster used the NASB translation rather than his usual ESV. He said that the ESV does “unforgivable violence to the text.” More specifically, it all has to do with verb tenses. The ESV makes it sound like it’s all said and done and that the Old Covenant is totally extinguished and replaced by the New. Classic Evangelical doctrine. 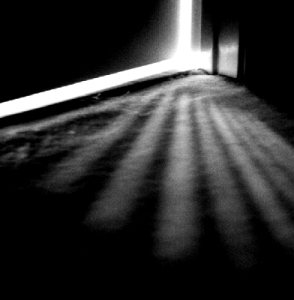 However, the actual Greek doesn’t say things like “has become obsolete” but rather “is becoming obsolete,” describing an active process that is still happening today (as Paul and the author of the Hebrews epistle were writing). In other sermons, Lancaster said that we are still living in Old Covenant times. We may have one foot in the New Covenant, but we still aren’t through the doorway yet. We won’t be until the dead are resurrected, Messiah returns, his identity is revealed, and his brothers and sisters, that is, the Jewish people, recognize him, come close to him, and are reconciled with him in the forgiveness of sins.

In those days, King Messiah will be revealed to the world, he will reveal the Supernal or Heavenly Torah and teach us all the things we currently misunderstand and all of the hidden things that in this life, we cannot possibly know. And he will be our King and we will be his people, all of Israel, and the people of the nations who come alongside and who are called by his name.

5 thoughts on “Sermon Review of the Holy Epistle to the Hebrews: Glory to Glory”