What we are talking about here is developing Messianic Jewish Household Spirituality. At Intefaithfulness we are doing this through an initiative called HaB’er (“The Well”). As resources of time, finances, and personnel allow, we will be providing materials, instruction and encouragement to Jewish and Intermarried households who recognize the priority of developing “The Three-Stranded Cord” of ever-deepening engagement with Jewish life, Yeshua-faith, and with God’s Presence. Our mission statement is “Living well at home in Jewish life with the Messiah.”

In Christianity, the main location for worship and prayer is the Church. In Judaism, it’s the home. Rabbi Dauermann points out in his article that, for Yeshua-believing Jews, whether they are in the Church or in the Messianic Jewish synagogue, they were “shaped” by American evangelicalism and thus, tend to be institution-oriented rather than home-oriented as are other religious Jews.

I’m not writing to comment on Jewish religious praxis, whether in the Messianic arena or otherwise. I’m here to write about the rest of us.

Actually, I can’t count myself as one of the Gentiles I want to discuss since, for a lot of reasons, the “practice” of my faith in the home is affected by the presence of my Jewish wife and children, none of whom are “Messianic”.

But I think the points Rabbi Dauermann brings up about the Messianic Jewish movement could be adapted to Jesus-following non-Jews, whether we call ourselves Christians, believers, “Messianic Gentiles,” or anything else.

For a lot of us, our faith consists of going to church on Sunday, which includes the worship service, the sermon, and Sunday school. Then, if we’re really ambitious, there are programs, usually offered on Wednesday evening, in which we can participate.

But what about the rest of the time? What about our day-to-day lives?

In this, I think particularly an Orthodox or perhaps Conservative Jew might have an advantage.

Oh, Christians wouldn’t consider it such. I recall being in a Sunday school class a few years ago and hearing the teacher remark how we are so fortunate not to be “under the law” anymore (not that we ever were), and having been freed by the grace of Jesus Christ.

But free to do what? Play a few holes of golf after leaving church services and going out to lunch? How many Christians even say grace before eating if they’re in a public place?

Jewish practice may seem cumbersome to many non-Jews, but it has the advantage of continually reminding the Jewish person that God is always present. If you wear a kippah in acknowledgement of God being above you, your awareness is a persistent as your apparel.

Add to this all of the blessings to be said on a wide variety of occasions. If you were raised in an observant Jewish home, you started learning this practice in childhood, but for a Jew who was raised secular and became religious as an adult, there is probably something of a learning curve. Nevertheless, the message seems to be that a Jew is always obligated to acknowledge God in everything.

An observant Jewish life doesn’t occur just on certain days of the week or only between the hours of such and thus, it occurs from the moment you wake up until you go to bed at night.

About the only thing I’ve allowed myself to carry over from my past is reciting the Modeh Ani (in English) when I discover I’m awake in the morning and about to get out of bed. It’s a basic confirmation that I owe each day of my life to God.

The day-to-day religious practice of a Christian or otherwise religious non-Jew is not well-defined. We don’t have the rich history of tradition of the Jewish people to draw upon. Sure, some non-Jews have chosen to adapt bits and pieces of those traditions in their lives, but we don’t share Jewish history and, in most cases, Jewish community, so it seems at least a bit out-of-place.

I should say at this point that I’ve met Christians who have fully-realized and completely integrated lives of faith. Every thought and action is directed to the service of Christ and to people around them. However, I wouldn’t consider this a very common practice, more’s the pity.

But returning to practical praxis, among the very first non-Jewish Yeshua-followers who had learned from Jewish mentors, such as the Apostle Paul, their day-by-day behavior probably looked pretty “Jewish,” since it was the only model they had available, but nearly twenty centuries have passed and that connection has long since been lost.

Some congregations and other collections of Jews and Gentiles who are devoted to Yeshua as Messiah are attempting to reinvent that relationship, but it’s pretty inconsistent. I think I recently mentioned how fragmented the body of Messiah happens to be, and I don’t see it becoming any more unified in the near future.

But regardless of our religious orientation and our access to community of any kind, we still, as individuals, have a responsibility to not only maintain our awareness of the God above our heads day-by-day, hour-by-hour, but to act out of that awareness. For the non-Jewish believer, as I’ve already said, there isn’t a well-defined set of behaviors and traditions for us to draw upon. Nevertheless, we can do something. We just need to be more deliberate and maybe more creative about it. 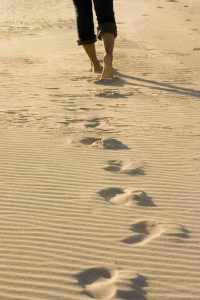 If we are walking in the dust of the footsteps of our Rav, so to speak, what should we do?

“Then the King will say to those on His right, ‘Come, you who are blessed of My Father, inherit the kingdom prepared for you from the foundation of the world. For I was hungry, and you gave Me something to eat; I was thirsty, and you gave Me something to drink; I was a stranger, and you invited Me in; naked, and you clothed Me; I was sick, and you visited Me; I was in prison, and you came to Me.’ Then the righteous will answer Him, ‘Lord, when did we see You hungry, and feed You, or thirsty, and give You something to drink? And when did we see You a stranger, and invite You in, or naked, and clothe You? When did we see You sick, or in prison, and come to You?’ The King will answer and say to them, ‘Truly I say to you, to the extent that you did it to one of these brothers of Mine, even the least of them, you did it to Me.’”

Do kindness everyday. No, you don’t have to save the world every hour on the hour, but you can take advantage of your opportunities, even in very tiny ways. Pick up a bit of litter and throw it in the trash. Hold the door open for someone. At this time of year, there are plenty of people ringing bells in front of stores taking in donations. Drop your loose change into the bucket. The next time someone cuts you off in traffic, instead of getting mad at them or competing with them on the road, let them have their way. Maybe they have a really good reason for being in a hurry.

A few days ago, I came across a news story about a homeless Jesus statue that is being erected in numerous communities. The concept and application are controversial, and while I agree that $40,000 per statue could be better spent actually sheltering the homeless, feeding them, and clothing them, the symbolism invoked, for me, the quote from Matthew 25.

Jesus is already homeless, and poor, and hungry, and needy. He is because we have homeless, poor, hungry, and needy people in our communities. If we wish to serve our Rav and to “do what Jesus would do,” then the Bible makes it abundantly clear how to respond.

But what about this?

If the world of Messianic Jewish believers is to be established, sustained, renewed and passed on from generation to generation, the efforts of religious school, seminary and congregation will fail unless we begin at the center: the home. It is for this reason that Jewish religious discourse terms the home a Mikdash M’at, a little holy sanctuary. This is the center. This is the microcosm from which blessing proceeds to the macrocosm of life, and socially, this is the seed from which the Kingdom of God will grow in the Messianic Jewish context, or not. Similarly, we find in Scripture that it is at the center, the Holy of Holies, where holiness is most concentrated and from which it radiates out into the community of the people of God and to the wider world. Think of the design of the tabernacle in the wilderness and each of the First and Second Temples, each termed a “Beit Mikdash.” In Jewish life the home, the mikdash m’at, is the Holy of Holies from which spiritual identity and vitality radiates out into the world and daily life. Apart from this center, all is empty religious noise and clamor, gongs and cymbals, and too often, as we will admit if we are honest, smoke and mirrors.

This is how Rabbi Dauermann ended his essay, with a plea to re-establish Messianic Jewish homes as Jewish homes, making them the “Holy of Holies.”

I’m not sure how this is done in non-Jewish homes. I’ve known a few Christians who make a little “altar” in their homes, putting a cross, a Bible, and other religious objects on a table to be the center of family prayer.

I’m not particularly keen on building “altars,” but the idea of family prayer and family Bible study time seems to be a good start.

I don’t have any practical suggestions beyond what I just mentioned, and as I’ve already said, this isn’t an option for me personally, but if somehow it were possible to treat our own homes as sacred places, to realize that God dwells among us as we eat dinner, watch TV, help our kids with their homework, read our Bibles, read anything else, surf the web, answer text messages, then maybe, just maybe we’d act differently in our own homes…and everyplace else.

A little bit of light pushes away a lot of darkness.

4 thoughts on “Living With God Everyday”