Really, I don’t know why I respond to Facebook clickbait sometimes.

No, that’s not fair. It’s not “clickbait” as such. The person who posted the statement is honest and forthright. We just happen to disagree, that’s all.

Q: What do you say when someone protests, “We’re not under the law, we’re under the New Covenant!”
A: I would respond as follows…

Q: When the Scriptures describe the New Covenant, in Jeremiah 31:31-34 (which is also quoted in Hebrews 8:8-12) what is the first thing God says He will do in the fulfilling of the New Covenant?
A: “I will put my law within them, and I will write it on their hearts.”

Q: What is the law that God will write on our hearts as part of the New Covenant?
A: According to Romans 8:1-11 those who walk in the Spirit will submit to God’s Law, so that it “might be fulfilled in us, who walk not according to the flesh but according to the Spirit.” So, we are no longer under the “condemnation” or “curse” or penalty of the law, but we are most certainly still instructed by God’s law. In fact, it is now being written on our hearts, so that we might faithfully walk it out. According to Ephesians 2:8-10 this is why we were saved by grace through faith: that we might walk in “good works” which God, “prepared beforehand, that we should walk in them.” 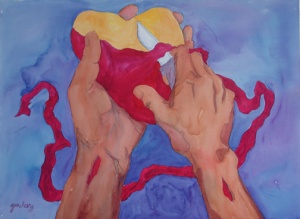 I happened to mention that Jeremiah 31:31 states only the House of Judah and the House of Israel, and not the Gentiles at all, participate in the New Covenant. Christianity sidesteps this little problem by cherry-picking various New Testament scriptures while ignoring the fact that there’s no linear progression from Jeremiah 31 and Ezekiel 36 and those particular passages. In this case Ephesians 2 was invoked.

My response was to point to a two-part series on Ephesians 2, Abraham, and the unique Jewish mission I wrote over 14 months ago, specifically citing the works of Carl Kinbar and Derek Leman.

The response to my response was to have Kinbar and Leman (and by inference, me) accused of “aberrant theologies”.

“The inappropriate emphasis of Jewish or Gentile identity will inevitably result in aberrant theologies.” … as demonstrated by Kinbar and Leman.

Just to be clear, the dictionary definition of “aberrant” is “departing from an accepted standard.” Synonyms include “deviant, deviating, divergent, abnormal, atypical, anomalous, irregular.”

Reminds me of those times when the head Pastor of the church I used to attend stated that he spoke “sound doctrine,” implying that anyone who disagreed with him was teaching “unsound doctrine.”

In other words, “agree with me or you’re wrong.”

Of course, the arguments being used against me are based on Covenant Theology which I’ve already discounted, at least within my own little world view.

This is all my fault. If I’d just learn that people don’t want to discuss, they want you to be “aberrant,” then I’d (hopefully) not engage them, even the nice ones, in such conversations. They never end well. If you’re mainstream, you are always right. That’s one of the reasons I don’t go to their churches. No room for minority opinions. No place for the occasional oddball. The Church is for conformists (of course, most religious institutions require such a thing by definition).

I guess it doesn’t matter if I’m right either. Let them have their victories over the Jewish people and Judaism, over the Torah and the Temple. God will be God no matter what I say or no matter what anyone else says, either.

I just don’t believe God will delete my Jewish wife and children based on a theological technicality that wasn’t even conceived of until after the Gentile Christians threw the Jewish disciples of Yeshua out of their own party sometime in the early second century CE and after.

No, that’s not really what Covenant Theology says…well, not exactly. I just don’t think you have to drag the Jewish people and Jewish praxis into the mud in order to elevate the Messiah. I believe both ascend together. Why would the King of Israel bring down his Israelite subjects, the named members of the covenants with God, in order to elevate a non-covenant people? After all, without those covenant people who are already near to God, how can a non-covenant people be brought nearer to the God of Israel by them and by their King?