Someone once asked the Chozeh of Lublin, zt”l, an interesting question about a well-known statement found on today’s daf. “Our sages tell us that a person who says something in the name of the one who originally said it brings redemption to the world. It seem strange that after all these centuries that the Jewish people have learned Talmud—which quotes the original source for every statement—we have not yet been redeemed!”

The rebbe immediately supplied an excellent reply to this question. “We can understand this in light of what I have already said: that there are two types of redemption. Besides a general redemption for the Jewish people through our righteous redeemer, there is also a personal redemption for every Jew. So the redemption alluded to here is not the ultimate redemption at all. It refers to every Jew’s personal needs, both material and spiritual. When a Jew says something in the name of its originator, he affords this type of redemption to the world.”

Rav Shmuel, the student of the renowned Be’er Mayim Chaim, zt”l, gave a similar response. “It is clear from the very words of our sages themselves that this does not refer to bringing Moshiach. Firstly, it says that it brings גאולה , redemption, not the גואל , redeemer. Secondly, our sages learn this from Esther. When Esther revealed the assassination plot of Bigsan and Seresh to Achasverosh, she told him this in the name of Mordechai. Just as there we find that this led to a specific redemption for the Jews and it was not the actual arrival of Moshiach, the same is true at all times. When someone says something in the name of its originator, a Jew somewhere is saved from difficulty!”

“O Jerusalem, Jerusalem, the city that kills the prophets and stones those who are sent to it! How often would I have gathered your children together as a hen gathers her brood under her wings, and you were not willing! See, your house is left to you desolate. For I tell you, you will not see me again, until you say, ‘Blessed is he who comes in the name of the Lord.’” –Matthew 23:37-39 (ESV)

I’ve written about the connection between Jewish return to the Torah and Israel’s national redemption before, but I still don’t understand it very well. Our “story off the daf” for the previous Shabbat discusses what seems to be a related matter, but while I think it’s interesting and perhaps ultimately important, the ability to fully comprehend what it means against the larger backdrop of Israel, the Messiah, and humanity continues to elude me.

I usually “get in trouble” for two reasons when I opine in this direction. I am usually criticized for “buying into” the various arcane and mystic Jewish writings as if they are fact, and I am accused of applying midrash as if it can be directly attached to the Gospels. While none of this is necessarily true, I do believe it is important to illustrate that general Jewish thought and perspectives on matters such as redemption, the Messiah, and God can be bound by a single though slender thread as we weave our way from ancient to modern times. It’s the thread that’s important because it shows that the destruction of the Second Temple did not disconnect the Jewish people from their faith in or their covenant relationship with God.

What remains mysterious to me though, is how to connect the Jewish vision of Israel’s national redemption and the return of the Messiah back to what we see in the Scriptures. I think there is a clue, albeit a rather faint one, in the Master’s lament over Jerusalem from Matthew 23:37-39. Let’s consider a few things.

The general assumption in Christianity is that the Temple was destroyed and the Jews scattered because they had rejected Jesus as the Messiah. But is that true? Can we find anywhere in either Scripture or Rabbinic commentary that says the Jews will suffer exile for the rejection of the Messiah? If you know where this is found, please point me to it, because I have never seen such a pronouncement in the Bible.

Why do Jews believe the Temple was destroyed and the Jewish nation sent into exile?

Why was the Temple destroyed? One of the reasons given by our Sages was unwarranted hatred. The Jewish people, even during the siege of Jerusalem, remained fractionalized and divided. And on the individual level, there was a lack of concern, love, and respect for each other.

How can this be corrected? By showing unrestrained love. By reaching out to another person – any other person – and showing him care, consideration, and concern. Do a favor for someone else, not because there is a reason to do so, but because you care for him.

“Keeping In Touch: The Three Weeks”
Based on the teachings of the Lubavitcher Rebbe
Rabbi Menachem M. Schneerson
Adapted by Rabbi Eli Touger
Chabad.org 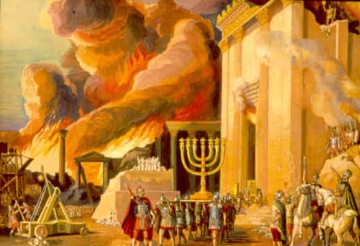 There are probably other traditional reasons but this is the one I encounter most often. Notice that a solution to the exile is also offered in showing “unrestrained love” toward your fellow. Our popular culture refers to “random acts of kindness” which sounds like a good idea, too.

Historically and in Scripture, we find that God has promised the destruction of the Temple and Israel’s national exile as consequences for disobedience to Torah and straying after “alien gods,” which of course, has little or nothing to do with a rejection of Jesus as Messiah (Post-Second Temple, the Jewish resistance to pursuing “alien gods” is one of the primary reasons why many Jews have rejected the Christian Jesus). Messiah, in Jewish thought, isn’t the cause of national exile, but the ultimate hope of its end.

Galut means exile. Nearly 2,000 years ago the Jewish nation was driven out of its homeland and sent off into a tear-soaked galut that lasts to this very day. We wait and yearn for the day when our galut and suffering come to an end, when we will be returned to the Holy Land, with the coming of our redeemer, the Moshiach.

Now let’s return to the Messiah’s lament over Jerusalem. What does he say is Israel’s “crime?”

O Jerusalem, Jerusalem, the city that kills the prophets and stones those who are sent to it! How often would I have gathered your children together as a hen gathers her brood under her wings, and you were not willing!

In every era of disobedience in Israel, those messengers of God, the prophets, were imprisoned or killed when they brought a message that was intended to turn them from their sins back to God. It wasn’t so much that the identity of the prophets were in doubt, Israel just didn’t want to hear the message. They were not “willing to be gathered.” So too in the time of Jesus. Many believed he was the Messiah and while history records that the level of religious observance during the late Second Temple era was rather high among the general Jewish population, baseless hatred and hostility between a Jew and his fellow was also present. The message of Jesus was to love one another (John 13:34) but largely, the message was rejected.

So what is the consequence for such a rejection of the message of love and repentance? There are actually two. The first is:

See, your house is left to you desolate.

This is exactly what happened when the vast majority of the Jewish population was forced out of Israel. The Land of Israel (“house”) was left desolate, not only of the Jewish people but of the blessings of God. This desolation would continue to be literally true in the land as long as there was not a substantial Jewish presence. The famous American author Mark Twain (Samuel Clemens) described such desolation:

“….. A desolate country whose soil is rich enough, but is given over wholly to weeds… a silent mournful expanse…. a desolation…. we never saw a human being on the whole route…. hardly a tree or shrub anywhere. Even the olive tree and the cactus, those fast friends of a worthless soil, had almost deserted the country.”

from The Innocents Abroad

The punishment it seems, not only affected the Jewish people, but the Land of Israel as well.

But what of the second consequence:

For I tell you, you will not see me again, until you say, ‘Blessed is he who comes in the name of the Lord.’

The common understanding of this is plain. Israel will not see the Messiah again until it declares him (i.e. Jesus) as Messiah and Lord.

I must admit, it’s difficult to connect the national redemption of Israel and return of the Jewish people to the Torah with not only the Messiah’s return, but in Israel’s specifically recognizing Jesus as the Jewish Messiah. So in general, when do Jews believe the Messiah will come. Opinions vary, but the Judaism 101 site offers a summary:

None of those options seems to directly connect to, “you will not see me again, until you say, ‘Blessed is he who comes in the name of the Lord.'” I must admit to being at a loss, although the first three and particularly the first option seem somewhat promising.

So, either I am unaware of some vital scripture or other piece of information that ties the Messiah’s lament to how Jews understand national redemption of Israel, the Torah, and the coming of Messiah, or there is a really big disconnect between Jewish thought, even within Messianic Judaism, and how the record of the Gospels and the writings of the apostles describe redemption and the return of Jesus.

I’m not writing this “meditation” to offer answers but to pose questions. This is my continued exploration into this topic, and I’m trying to understand without summarily dismissing the Jewish perspective on their own national redemption (as perhaps many other Christians would). I offer this subject up for discussion and commentary, particularly to my friends in the Messianic Jewish movement who may actually have a unifying solution. If there is an answer to the mystery, where can it be found?

Why were we made so small, with such great heavens above our heads? Because He desired creatures that would know wonder.

-Rabbi Tzvi Freeman
“Why the Heavens?”
Based on letters and talks of the Rebbe
Rabbi M. M. Schneerson
Chabad.org

7 thoughts on “The Messiah’s Lament”