Some people believe the 4 spring holidays (Passover, Unleavened Bread, Firstfruits, and Feast of Weeks/Pentacost) were fulfilled in Messiah’s 1st coming and that the 3 autumn holidays (Feast of Trumpets, Day of Atonement, and Feast of Booths/Tabernacles) will be fulfilled at his 2nd coming.

I knew Pastor Randy was going to start giving a series of sermons on the Festivals to better educate folks about their past and future (and hopefully their present) meaning. I forgot that meant my Sunday School class would be teaching on them too, since my class “mirrors” the Pastor’s sermons.

I like my Sunday School teacher but in many ways he has a very “basic” approach to the Bible, that is to say, very basically Christian. I’ve had to bite my tongue on a few occasions during a study rather than open a can of worms that would not easily be closed again.

To his credit, the teacher came up to me before the start of class today and said he expected I’d have a lot to say about next week’s lesson. That’s something of an understatement. I plan to really do my homework this weekend, come prepared with a lot of notes, and bring my Stone Edition Tanakh for good measure.

What’s kind of scary is that the Festivals won’t be approached based on their own merit, but on their “symbolic meaning” relative to Jesus and all that “fulfilling” stuff.

Really, Passover has been “fulfilled?” I’m not sure what that’s even supposed to mean. Does that mean it’s over. No more Pesach seders? Then why did Jesus say “do this in remembrance of Me” (Luke 22:19)? Oh. Am I supposed to believe that the sacrament of communion replaced Passover? What happens when the Temple is rebuilt? Will there be no Pesach sacrifices because Jesus “fulfilled” Passover?

Actually, I told my teacher that I do sometimes keep my mouth shut and my opinions to myself in his class on various occasions. Our conversation was light-hearted but I know I’m going to have concerns over the next two months. I won’t be as quiet as I have been in the past. I can’t be.

Actually, in preaching on Acts 14:21-28, I encountered my Pastor’s opinion on Shabbat as applied to Christians. This section of Acts addresses the end of Paul’s “first missionary trip” and his return to Syrian Antioch. Although the text doesn’t actually say Paul and his team rested, it’s assumed that once they returned to their “home church,” they may have taken it easy for a bit.

Both Pastor and my Sunday School teacher emphasized the importance of taking a break from our duties to recharge our “spiritual batteries,” so to speak. Pastor went so far as to mention the Shabbat, “but not in a legalistic sense” (Oy). He did say that he felt it was important to take one day out of the week as a day of total rest. That day can’t be Sunday for him since it’s his busiest day, but every Monday, he and his wife spend the day at their cabin. No phone and no Internet. Just taking it easy and pursuing some personal activities and projects.

From the way he’s described it to me, it doesn’t sound like a “Jewish” Shabbat as such, but it is a day of rest. However, Pastor says we can choose whatever day we want. I don’t see that in the Bible, but then, he’s not going to be preaching a Saturday Shabbat to his congregation, either. 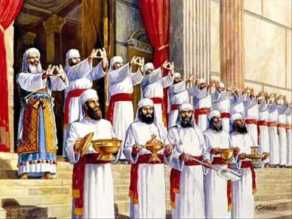 As an aside, in ancient times, the Kohenim (Levitical Priesthood) also worked on Shabbat and yet were held blameless (Matthew 12:5). I wonder when they rested? Of course, in the days of Jesus, the Priests worked on a rotational basis, so maybe it wasn’t as bad as all that. However, what about Rabbis working on Shabbat? But I digress.

I wonder if Pastor or anyone else at church would consider actually observing a Saturday Shabbat as “legalistic,” particularly if observed from sunset Friday to sunset Saturday and abstaining from some form of the Melachot or the thirty-nine types of work traditionally forbidden on Shabbos? Would it be legalistic to observe Shabbat because it honors God as the Creator rather than just because we need a rest?

Christianity didn’t switch Shabbat from Saturday to Sunday, they eliminated it altogether. Few Christians treat Sunday the way a religious Jew observes Shabbat, not even close. I think the church surrendering the Sabbath and its traditional observance was like Christianity shooting itself in the foot. Could you imagine the enormous relief and freedom we could experience if we didn’t choose to treat Sunday pretty much like any other day of the week?

That’s pretty much what I’m going to be addressing at church for the next two months. I’m actually kind of excited to hear what Pastor is going to say about the Festivals, but I’m also kind of dreading how it’s going to play in Sunday School. I’m going to go. In some ways, I really want to go. And I’m going to give input. People have become aware of my basic leanings and seem to be OK with it, but this will be the real test.

People are going to find out that in my own small way, I do observe the Festivals. My wife and kids being Jewish, we have a family seder each spring and I build a sukkah in our backyard each fall. I eat matzah instead of leavened products for the eight days of unleavened bread. And although I don’t always fast on Yom Kippur, I have done so periodically in solidarity with the Jewish people.

Too bad this didn’t come up before Tisha B’Av.

I’m sure I’ll have more to say after next Sunday’s message and Bible school study. This is where my real life experience and the mission illustrated in Boaz Michael’s book Tent of David intersect, hopefully not to forcefully, though.

20 thoughts on “A Christian Brings a Tanakh to Sunday School”