…these I will bring to my holy mountain
and give them joy in my house of prayer.
Their burnt offerings and sacrifices
will be accepted on my altar;
for my house will be called
a house of prayer for all nations.”
The Sovereign LORD declares—
he who gathers the exiles of Israel:
“I will gather still others to them
besides those already gathered.” –Isaiah 56:7-8

When Jesus heard this, he was amazed and said to those following him, “Truly I tell you, I have not found anyone in Israel with such great faith. I say to you that many will come from the east and the west, and will take their places at the feast with Abraham, Isaac and Jacob in the kingdom of heaven.” –Matthew 8:10-11

According to the prophets, the Feast of Booths celebrates a time when all nations will ascend to Jerusalem bearing tribute to King Messiah and celebrating the festival. In that day, all nations will ascend to His throne in Jerusalem in order to celebrate the Festival of Booths (Tabernacles). Obviously, this is a very important festival for disciples of Messiah today.

The Weekly eDrash
“A Tabernacle of Glory over Jerusalem”
First Fruits of Zion commentary on Sukkot
FFOZ.org

I’ve had my doubts.

No, I don’t doubt the word of God but on the other hand, given the division between different denominations of Christians and particularly between Christians and Jews, I wonder how we will all be able to sit down at the same table together “at the feast with Abraham, Isaac and Jacob in the kingdom of heaven” and rejoice in each other and in the Messiah?

Last week I hit a speed bump in my pursuit of the Ger Toshav as a possible model for a relationship between Christians and Jews, and today I was reminded of the state of discomfort and even enmity some Jews feel toward Christians based on this “wall photo” that was shared on Facebook. Add to that some of the comments from Jewish participants about Christianity:

“Christianity has to realize its error in deviating from what the original sect taught and practices before that connection can be made, before that door can be entered through. Only then will hope be found.” –said by S

“I’m saying that Judaism shouldn’t centralize the messiah. And in my opinion when it does, it’s a mistake. Christianity and the holocaust are results of such a mistake.” –said by A

“There are 2 paths in serving Creator: 613 commandments for Jews and Noahide Laws for gentiles. Thats the ideal modality. When gentiles invent their own religions or Jews don’t follow their commandments, they keep the world from reaching perfection which is the hallmark of the Messianic Age.” –said by V

…the reason you give for Christians accept Jews is impossible. a Jew is what he is. Why should he give up to a lesser level of spirituallity?

Your reason for Jews accept Christians, isn’t exactly that, but it has a reason… a reason found in Torah. As long as a gentiles thinks that a man is God, or that there are more than 1 God, or that the Torah given BY GOD to Moshe in Sinai isn’t valid, then a Jew cannot accept it. That’s Idolatry.

I, as a Jew don’t think that gentiles are lesser human beings!!!! NOT AT ALL!!! A Jew who call himself Jew but commits lashon haRa and proclaims hate, is a lesser human being than a gentile with a good heart for humanity. –said by X

From mainstream Judaism’s point of view, it is reasonable to expect this level of response in believing that Christians have misappropriated the concept of Messiah and bent it in very non-Jewish directions. But it also precludes any possibility of a Christian entering a synagogue setting (where it is known he or she is a Christian), learning of the wisdom of the sages, and even being a tiny part of the community, when that Christian’s basic faith would be seen as an affront. Both Jews and Christians pursue God in His vast and majestic Heavens, and yet we cannot build a simple bridge between our two worlds on here on Earth.

I can truly see how Jesus could say “when the Son of Man comes, will he find faith on the earth?” (Luke 18:8)

And yet the prophet says this:

This is what the LORD Almighty says: “In those days ten people from all languages and nations will take firm hold of one Jew by the hem of his robe and say, ‘Let us go with you, because we have heard that God is with you.’” –Zechariah 8:23

The Jews rely on the promises of God that “every man will sit beneath his own vine and fig tree and none will make them afraid” (Micah 4:4) while the Christians rely on the grace of Jesus and the word of the Apostle Paul when he said, “in all these things we are more than conquerors through him who loved us. For I am convinced that neither death nor life, neither angels nor demons, neither the present nor the future, nor any powers, neither height nor depth, nor anything else in all creation, will be able to separate us from the love of God that is in Christ Jesus our Lord” (Romans 8:37-39).

But each group believes God is speaking to only them and is excluding the other (and all others).

While Sukkot is a season of hope, in the present age it is also a season of despair, for while we (or at least Jews and those few Christians who will build a sukkah this year) are supposed to generously invite all guests into our sukkah for a meal and fellowship for the sake of God, how many people and groups will not be on the “approved” list? 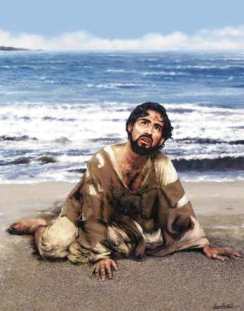 Like Jonah, we know the word and the will of God and yet we still seek to run away because it is against our human will to fulfill that word. God turned Jonah away from his mistaken path and delivered him to the great city to complete the job God gave to him, but how will God do that with us? It could begin with a single invitation into our homes and lives of someone we would otherwise not have considered letting in. It could begin with a Christian family accepting a single Jew into fellowship and the breaking of bread. It could begin with a Jewish family inviting a single Christian into their sukkah to enjoy a meal and the prayers. The question is, can it begin now, or must we wait for the Messiah to come (for the Jews) and come again (for the Christians)?

I’m not writing this for you who are “already onboard” with seeking a unity between Christians and Jews, but to those who seek to shelter themselves within their own groups and push away the rest of the world and the rest of the people God created. Is there a delight in committing one act of friendship and graciousness; an act of pure and simple love, not for your sake or mine, but for the sake of God?

G-d has many delights:

The delight that comes from a pure and simple act of love.

Greater than that, the delight that comes from an act of beauty sparkling in the darkness.

Greater than that, the delight when a child who has run away returns with all her heart.

Delight lies at the essence of all that is.

The Rabbi describes a world of people and ideals that does not exist, at least not yet. The hope that we all have in the Messiah is that one day, we will all be able to live in this world and be at peace with God, with all our neighbors, and most of all, be at peace within our own hearts. We will see that peace someday. But we have a very long way to go until “someday” gets here.